The markets opened on Monday shrugging aside the weekend news on the targeted air strikes by the U.S. and its allies on Syria. Lack of response from Russian authorities saw the markets gaining risk appetite.

On the economic front, the day was relatively quiet. U.S. retail sales report released showed a 0.6% jump in retail sales on the month in March. This beat analysts’ forecasts of a 0.4% increase. Core retail sales excluding autos and gasoline sales rose 0.2% on the month as expected. Other data during the day included the U.S. Empire State Manufacturing index which fell to 15.8 missing forecasts of 19.8 and easing sharply from 22.5 that was seen previously.

Looking ahead, the economic data today will see the release of the UK jobs report. The unemployment rate is expected to remain steady at 4.3% while wage growth is expected to accelerate. Later in the week, the UK’s inflation report will be released which will show if wage growth has managed to catch up with the strong pace of inflation increase.

In the NY trading session, the building permits data will be coming out alongside the industrial production figures. FOMC members, Williams, Bostic and Quarles are expected to speak later in the day. 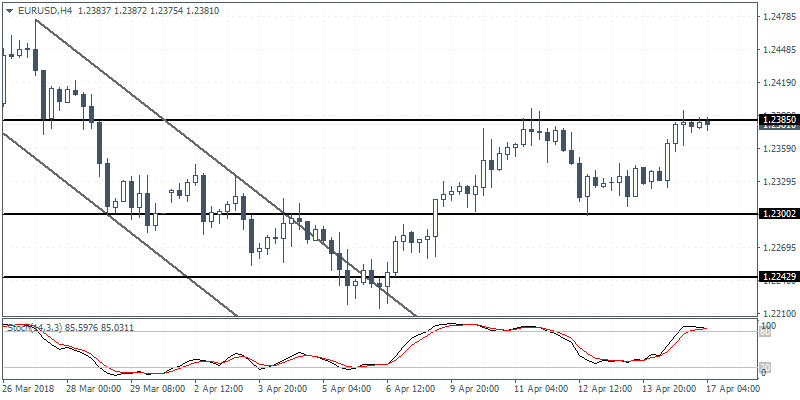 EURUSD (1.2381): The EURUSD was bullish on Monday with price action rallying to test the resistance level at 1.2400 briefly before pulling back. The retest to this resistance level could once again see some downside momentum in price action. With the EURUSD trading sideways within 1.2400 and 1.2300, further gains can be expected only on a breakout above 1.2400. To the downside, we expect the declines to be limited to the support level at 1.2300. 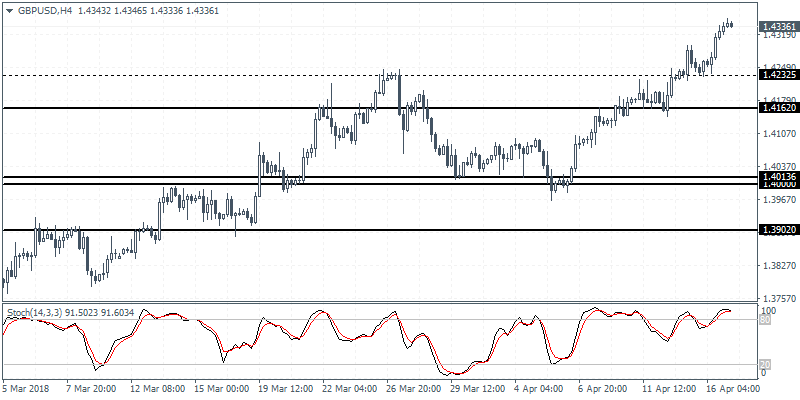 GBPUSD (1.4336): The British pound posted strong gains with price action rallying to fresh highs of 1.435 earlier today. The gains come ahead of today’s jobs report where expectations are high that wage growth increased strongly in the three months ending March. We expect to see some near term correction in prices as GBPUSD is likely to retest the support level at 1.4232. A rebound off this level could keep the bullish momentum supported for further gains. 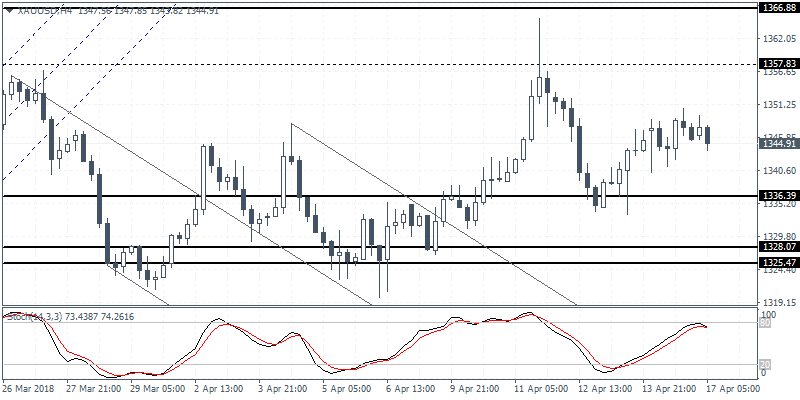 XAUUSD (1344.91): Gold prices were seen easing back after initially rising on the day on Monday. Price action is seen retreating following the brief rally to 1347 level. The downside momentum could push gold prices to test the old support level at 1336. To the upside, gold prices will have to post a higher high above the recent highs near 1347. This will put the previous resistance level at 1357 back into target to the upside.

Visit the Orbex website for more technical and fundamental analysis released throughout the day.