The U.S. dollar was seen trading mixed across the board on Wednesday. Data from the UK showed that consumer prices slowed even further, rising just 2.5% on the year ending March. This was well below expectations of a 2.7% increase. Core CPI was also weaker, posting an increase of 2.3% on the year, slowing from 2.4% previously.

Inflation data from the Eurozone showed that headline inflation rate slowed to a pace of 1.3% in the year ending March compared to February’s print of 1.4%. Core CPI for the Eurozone was steady at 1.0% as forecast.

The Bank of Canada was seen holding the interest rates steady at 1.25% but the central bank signaled hawkish views which sent the Canadian dollar briefly higher on the day.

Looking ahead, the economic calendar for the day will start off with the release of the retail sales report from the UK. Economists’ polled forecast a 0.5% decline in retail sales for the month of March. This marks a contraction in retail sales compared to February’s print of 0.8%.

Later in the day, FOMC member, Lael Brainard will be speaking. Brainard is expected to maintain her hawkish views on the economy. On the economic front, the data from the U.S. will cover the Philly Fed manufacturing index which is expected to fall to 20.8.

Other Fed members due to speak over the week include Loretta Mester. 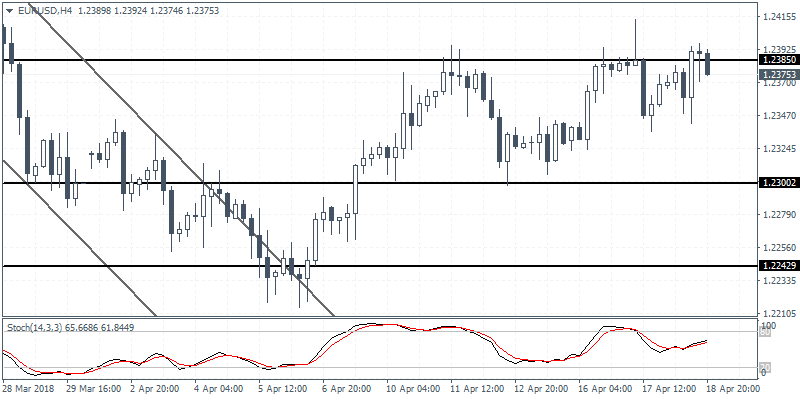 EURUSD (1.2375): The EURUSD was seen trading slightly bullish on the day as price action retraced the losses from the previous day. The consolidation near the 1.2400 level of resistance continues with the common currency unable to break past this level. The failure to break past the resistance level signals a continued sideways range in EURUSD. To the downside, EURUSD could see a retest of the lower support at 1.2300. The price action also points to a potential ascending triangle pattern with higher lows being formed. Therefore, further gains cannot be ruled out on a breakout above 1.2400 which could signal a move toward 1.2430. 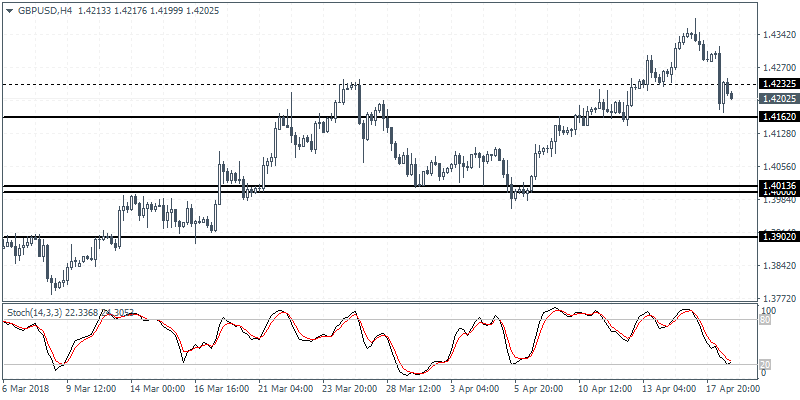 GBPUSD (1.4202): The British pound is seen extending the declines for a second day as price action is currently seen trading below the minor support level of 1.4232 level. The break down below this level signals a move toward the major support level at 1.4162. A retest of this support level could see prices posting a rebound. To the downside, further declines could be expected in the event that GBPUSD fails to hold the support. The next lower support is seen at 1.4013. 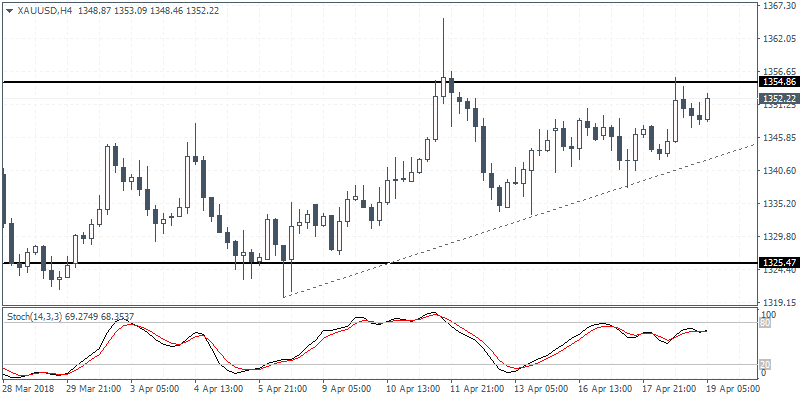 XAUUSD (1352.22): Gold prices were seen erasing the minor losses with price action pushing higher at the time of writing. The resistance level at 1354 remains a strong level which could see the current gains being stalled. There is scope for gold prices to breakout higher if the resistance level is breached. To the downside, the rising trend line is expected to hold prices support, but a break of the rising trend line could signal a decline back towards the support level at 1325.50 level.

Visit the Orbex website to see more technical and fundamental updates throughout the day.