The U.S. dollar was seen posting gains by Friday’s close. Economic data was mostly quiet on the day. Canada’s inflation report showed a slower than expected pace of rise in inflation. Headline CPI was seen rising just 0.3%, missing forecasts of a 0.4% increase. This was also slower than the 0.6% increase in inflation registered in the month before.

The NY trading session will see the BoC Governor Poloz speaking in the evening. The BoC governor’s speech comes just a week after the Bank of Canada left interest rates unchanged but signaled further rate hikes this year. Economic data from the U.S. will see he release of the flash manufacturing PMI from Markit. 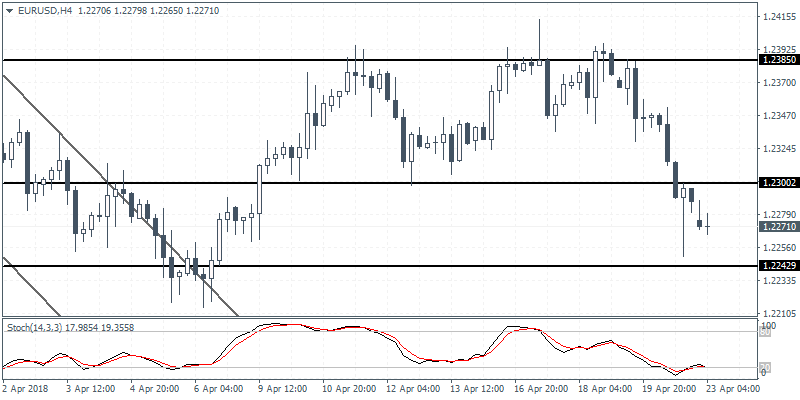 EURUSD (1.2271): The EURUSD extended declines for a second day as prices briefly fell to lows of 1.2250 before pulling back slightly. The retest close to the support level at 1.2243 came after price action fell strongly from the sideways range that was established at 1.2385 – 1.2300. In the near term, we expect to see a modest rebound in prices as EURUSD could potentially retrace the losses to test the breached support level of 1.2300 where resistance could be established. As long as the resistance level isn’t hit, the currency pair could be seen maintaining the new range of 1.2300 and 1.2243. 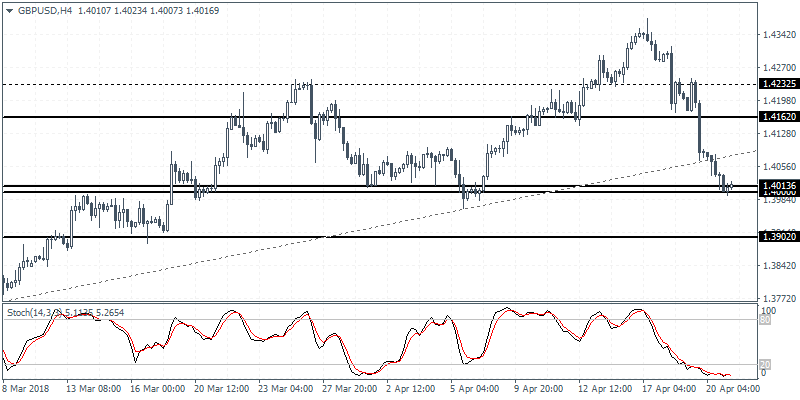 GBPUSD (1.4016): The British pound continued to extend losses with price action closing near the strong support level of 1.4000 region. The declines could potentially stall in the near term with a rebound off the support level widely expected. To the upside, the resistance level at 1.4162 could be tested and GBPUSD could maintain the range in the near term. To the downside, a breakdown below 1.4000 level could signal further declines toward the 1.3902 level of support. 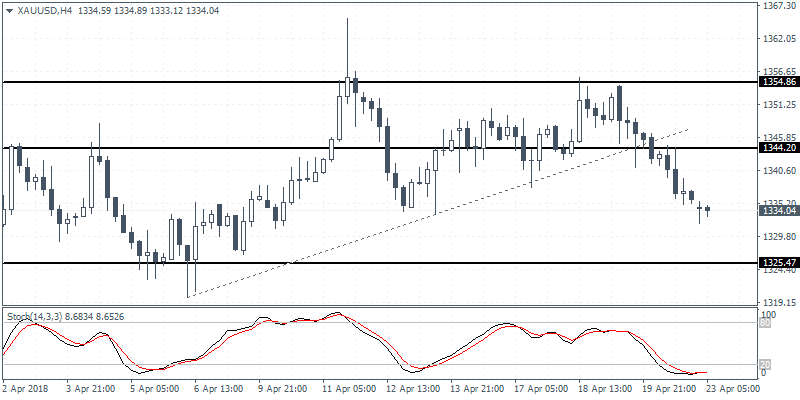 XAUUSD (1334.04): Gold prices were seen extending the declines after the minor rising trend line was breached last week. The declines could see a retest back to the breakout level of the trend line. Therefore, gold prices could reverse the losses and retest the 1344 level where resistance could be established. A reversal at this level could potentially signal further declines as price is likely to test the lower support level at 1325. Alternately, if gold prices manage to breakout above 1344 level then we could expect to see another retest back to the main resistance level at 1354.