The U.S. dollar was seen posting strong gains on the day across the board. The gains came amid data from the Eurozone showing that manufacturing PMI might have eased to 56.0 in April. Services PMI data was seen registering a print of 55.0, slightly higher from 54.8 that was forecast.

Canadian wholesale sales were seen falling 0.8% on the month following a revised 0.3%increase the month before.

Data from the UK will see the release of the public sector net borrowing data which is expected to expand to 1.1 billion GBP. The data from the U.S. is rather limited with the CB consumer confidence data that is expected to show a decline to 126.0 compared to 127.7 previously. New home sales are expected to rise to 625k, up from 618k that was registered in the month before. 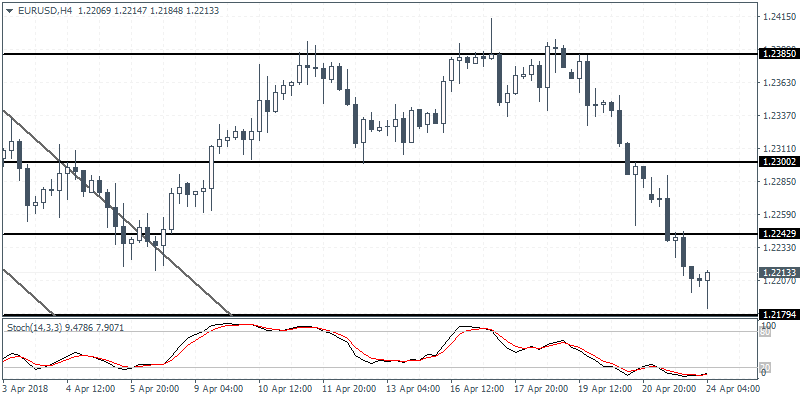 EURUSD (1.2213): The EURUSD currency pair was seen extending the declines for the third consecutive day. Price action was seen breaking below the 1.2241 level of support on the daily chart before reversing the declines, just a few pips off the 1.2180 level of support. In the near term, we expect price to retrace the losses to test the breached support level at 1.2250 on the 4-hour chart. Establishing resistance at this level could potentially keep EURUSD range bound within the 1.2180 level of support. Due to the fact that the EURUSD failed to test the previously breached support level at 1.2300, a breakout above 1.2250 will see the EURUSD testing this level for resistance. 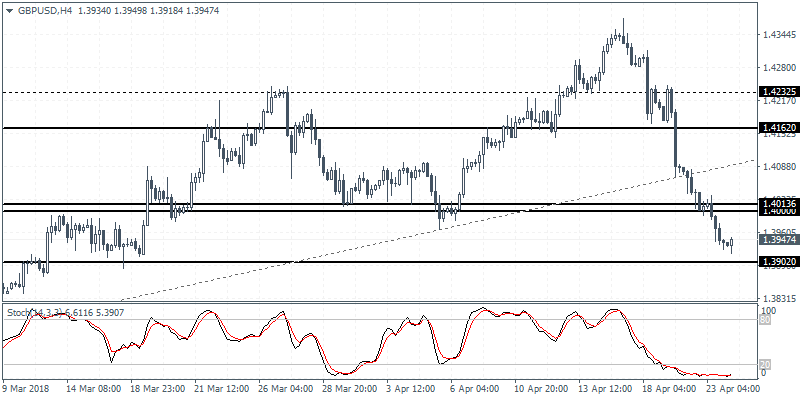 GBPUSD (1.3947): The British pound was seen giving up the gains made over the past few weeks as the major support level at 1.4000 failed to stall the declines. The breakdown below the 1.4000 support signaled further losses. Price action is seen reversing the losses just above the next main support level at 1.3902 level. The current rebound could be seen extending back to 1.4000 where it is likely for resistance to be established. The GBPUSD currency pair is expected to maintain its range within these levels for the moment. 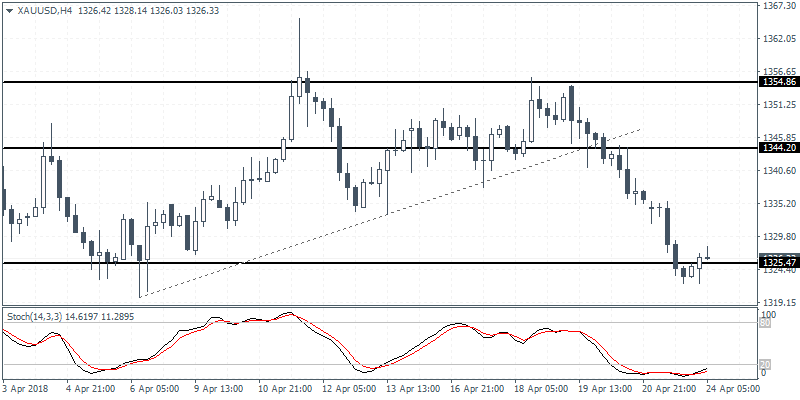 XAUUSD (1326.33): Gold prices fell sharply on the day as price action touched down to 1325.50 level of support. We see price action attempting to consolidate at the current levels. If a temporary bottom is formed at this level, we expect price action to retrace the losses to 1335 level which marks the 38.2% retracement level. Further gains could push gold prices to post a sharper correction toward 1344 which would mark the 61.8% Fib retracement from the highs of 1355.74 from 18 April and the current low at 1322.19 from earlier today.