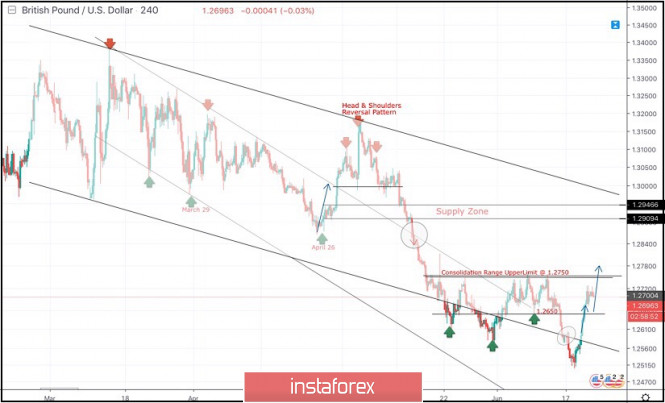 On April 26, another bullish pullback was initiated towards the price zone of 1.3130-1.3170 (the upper limit of the movement channel) where the depicted bearish Head and Shoulders reversal pattern was demonstrated on the H4 chart with neckline located around 1.2980-1.3020.

Bearish breakdown below 1.2980 allowed the recent significant bearish movement to occur towards the lower limit of the long-term channel around (1.2700-1.2650) where temporary bullish rejection was expressed.

Shortly after, temporary bullish breakout above 1.2650 was demonstrated for a few trading sessions. This enhanced the bullish side of the market towards 1.2750 which prevented further bullish advancement.

However, recent temporary bearish decline was demonstrated below 1.2600 hindering the mentioned bullish scenario for some time before bullish breakout could be achieved earlier This week.

For the bullish side of the market to remain dominant, bullish persistence above 1.2650 should be defended by the bulls.

As long as bullish persistence above 1.2650 is maintained on H4 chart, further bullish movement should be expected towards 1.2750 and 1.2830.

Conservative traders can have a valid BUY entry anywhere around 1.2650.