How You Can Benefit From Market Manipulation. Interview with Mr. Gavin Holmes of Tradeguider

Earlier today I had the unique opportunity to interview Mr. Gavin Holmes, CEO of Tradeguider. Gavin has a unique and very interesting story to tell. He started off life as a policeman in the UK and after 5 years serving as a bobby decided to start an exhibit design business where companies who wanted to exhibit their goods or services at trade shows would come to him with the intent of designing a booth for them.

In 2001, Gavin was visited by Mr. Tom Williams who explained to Gavin how the financial markets are in fact manipulated by the “smart money”. Tom was a syndicate trader for over 40 years who worked out of Beverly Hills, California. At first Gavin didn’t believe it and thought it was all conspiracy theory stuff. As he delved in further to explore this notion, he found to his amazement that the markets are in fact being manipulated by the institutional investors aka the smart money. Tom also showed him how he could capitalize on this as a trader. Tom’s wish was to bring his knowledge to the world but given that he was getting older, he felt he had to turn the reins over to someone who could spread the message. Gavin after having studied these methods and testing them himself wrote a book called “Trading in the Shadow of the Smart Money” and propelled Tradeguider to worldwide status.

Tradeguider methodology is based on the Wyckoff Method which was written as long ago as the 1930’s yet amazingly, many fund managers use that method today. Their solution is called VSA or Volume Spread Analysis which (if learned) will show where the institutions are either driving the markets up or conversely driving it down. It is a charting solution that runs on many platforms but it takes it a step further. Click on a bar and a box will open with text that will inform the trader what that bar is e.g.: SOS (Sign of Strength), SOW (Sign of Weakness), Upthrust, etc. This unto itself is amazing as the software is actually teaching you how to trade based on their methods. Please note this software can be used for stocks, futures and the Forex market. In fact in the video he shows how the Forex and futures currencies are correlated.

Gavin showed numerous examples of how the markets were being manipulated by showing articles from August, 2011 that stated gold was the last great bull market. He showed how the price ran up only to drop a short time later. I do recall that in one of his webinars he also talked about the price of crude rising to $200.00 a barrel. This was during the summer of 2008 when crude went to $148.00 a barrel and everyone thought the sky was falling. When he demonstrated this he also showed what happened with volume during these incidents. The volume will show that only large institutions were involved as the volume was far too great for the retail investor. We also discussed High Frequency Trading and the effect it’s had on markets. From his point of view HFT’s are doing what the smart money does, only faster. Tradeguiders view is that this is pragmatic reality. Remember that they trade in the shadow of the smart money, so they wish to follow that footprint.

Another story Gavin related was regarding the BP oil spill of 2010 whereby BP stock was dropping dramatically. The Tradeguider VSA chart showed a buy signal at this time and everyone thought Gavin was mad to propose this. Look at the chart for yourself: 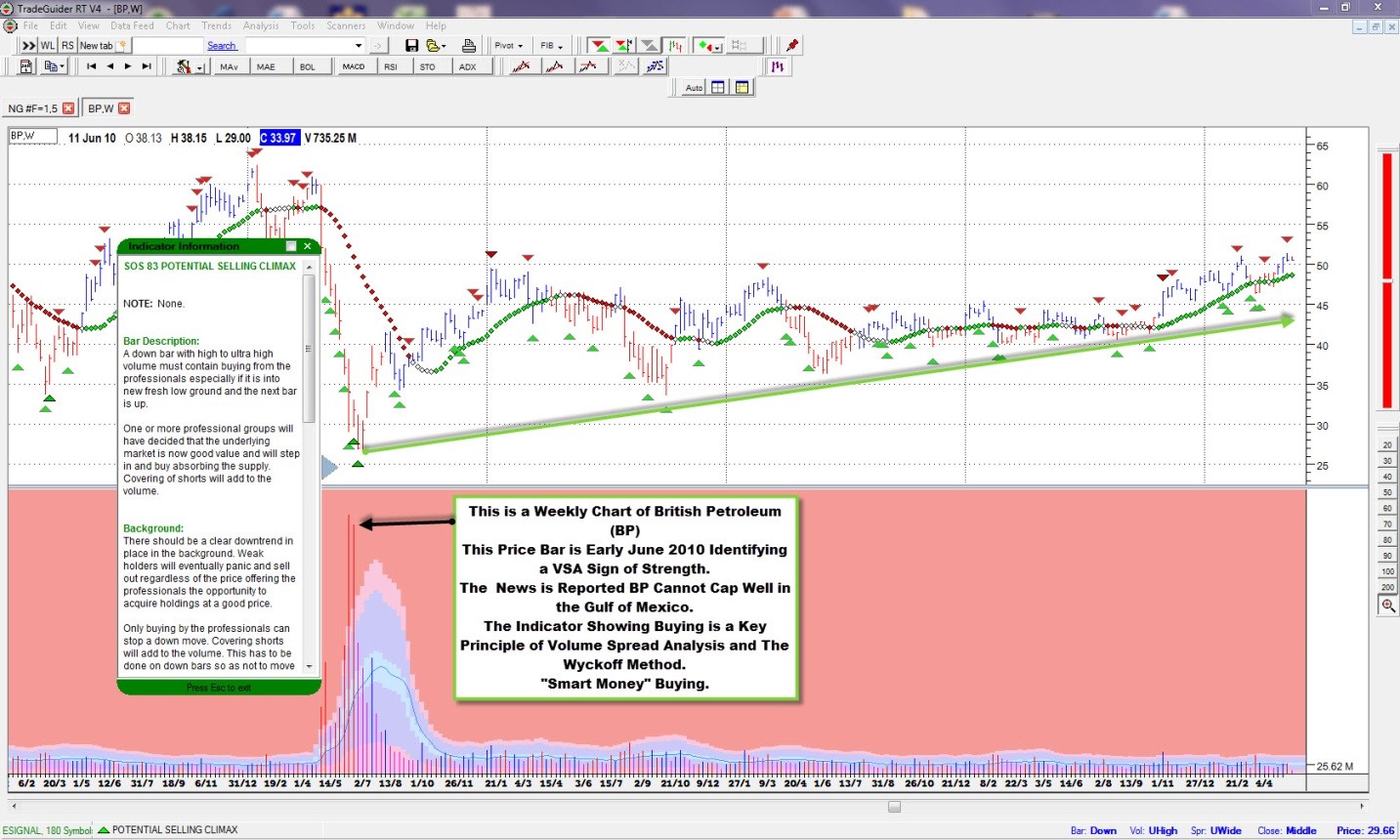 After the buy signal, look at what happened to the price of BP stock, it went up dramatically showing a unique buying opportunity. The box to the left of the signal shows how the solution can teach a user to use Tradeguider VSA to their advantage.

We discussed at length the future of trading and Gavin feels that auto trading is the wave of the future and is currently working on that as I write this. They also offer an alert service that can be sent to someone’s iPhone for trading purposes.

In summary, Gavin and his colleagues are trendsetters in the respect that they helped to bring market manipulation to the forefront and make traders aware that it does exist. In this regard they are educators. One thing he and I wholeheartedly agree on is trading is work. It is not easy so if someone wishes to truly learn the Tradeguider system, they have to understand that it isn’t a Holy Grail, silver bullet or magic indicator. Conversely if the student is willing to apply themselves and be prepared to do the work involved, they could have the life of their dreams. Gavin has……

Nick Mastrandrea is the author of Market Tea Leaves, a daily newsletter that is dedicated to your trading success. We teach and discuss market correlation. Market Tea Leaves is published daily, pre-market in the United States and can be viewed at www.markettealeaves.com. Interested in Market Correlation? Want to learn more? Signup and receive Market Tea Leaves each day prior to market open. As a subscriber, you’ll also receive our daily Market Bias video that is only available to all subscribers. [space height="20"] [social type="twitter"]https://twitter.com/MarketTeaLeaves[/social] [social type="google-plus"]https://plus.google.com/u/0/100398191873287497330/posts[/social] [social type="youtube"]https://www.youtube.com/user/MarketTeaLeaves[/social]
Next Story