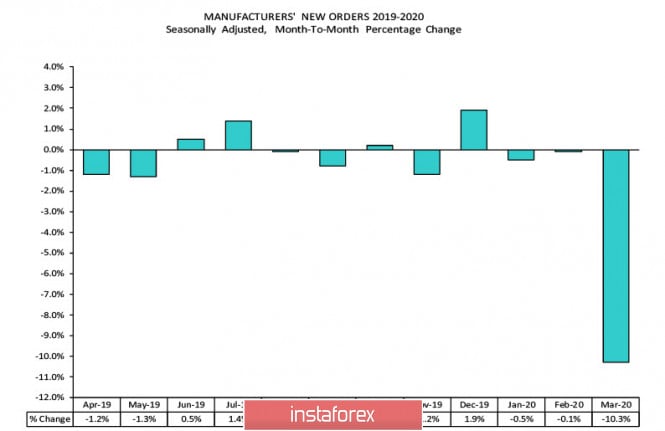 Markets are set up complacently on Tuesday morning, US stock indexes showed a slight increase the day before, oil is trying to push off the base, and yields have stopped falling. Trends give a temporary advantage to commodity currencies, but the chances that this is a long-term reversal are still vanishingly small.

The dynamics of a fall in production orders in March in the USA is impressive, while forecasts for April are much worse.

An increased volatility is possible today, the reason for which may be the publication of the ISM services sector.

Canada will present quite a lot of macroeconomic data this week, which may lead to a rise in loonie. One hundred companies from the TSX list will publish income level reports, an employment report in April will be released on Friday, forecasts are extremely negative. According to preliminary estimates, the Canadian economy lost 5.5 million jobs, the unemployment rate could jump to 20%.

The Bank of Canada is going through a change of manager, Poloz will give way to Macklem, whose views so far are a mystery to investors. In particular, it is unclear whether the possibility of introducing negative rates is being considered, although it is known that he adheres to the position of the former head of the Fed, Bernanke and is inclined to consider the current crisis not a fundamental, but rather a “natural disaster,” which is a bullish factor for loonie.

The net short position in Canada increased again and amounted to 2.075 billion last week, the dynamics are negative, and if it were not for attempts to restore oil prices, the forecast would be in favor of a further decrease in the loonies. The estimated fair price is much higher than the spot price. There is no obvious direction, so the probability of further growth of USD/CAD looks preferable. 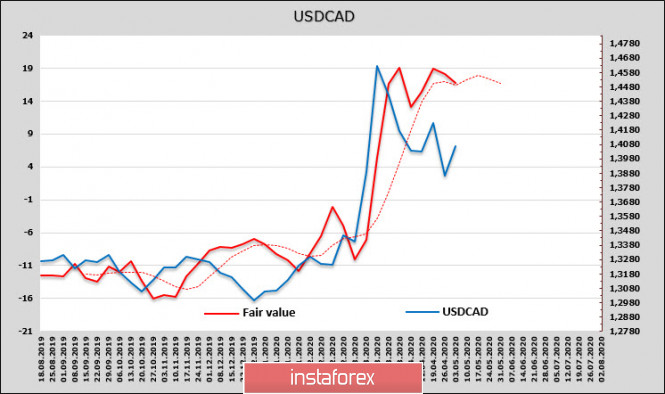 According to the combination of factors, the USD/CAD pair looks neutral and will continue to trade in the range of 1.3850 – 4260. The bullish mood supports the reduction of tension, but it is highly likely that we should wait for another wave of panic, which will allow USD/CAD to resume growth. In general, we need to focus on finding reasons to buy, since the current decline in tension is temporary.

A serious drop in domestic and foreign demand led to an even faster decline in production in Japan in April than in March. Employment has declined at the highest rate since June 2009, e June 2009, and expectations are at their lowest since the index was calculated.

Jibun Bank Japan’s PMI index fell to an 11-year low, signaling a sharp deterioration in business conditions and a growing wave of order cancellation reports. Over the 12-month period, Jibun Bank sees no reason to improve the situation.

The drop in domestic demand has led to the fact that the long-standing struggle of the Bank of Japan and the government with deflation threatens to end in total defeat. Tokyo’s consumer price index fell in April to 0.2%, and although it is still far from the 2009 lows, the trend is clear.

The CFTC report showed a growing interest of speculators in the yen, the net long position rose to $ 3.781 billion, and the estimated fair price tends to increase, which indicates growing risks of the yen strengthening. 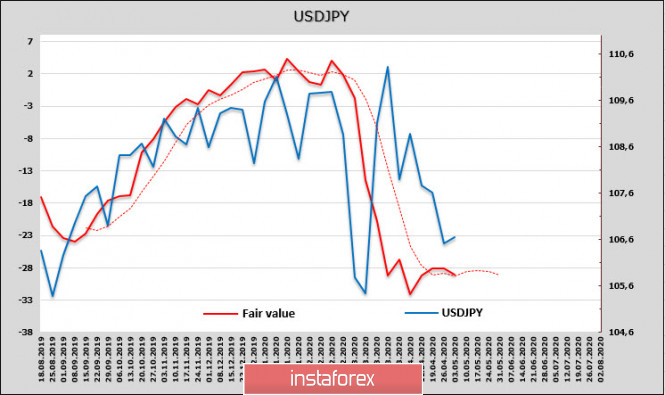 The slowdown in the USD/JPY decline is due to the temporary effect of positive growth from a decline in the spread of coronavirus and the emergence of plans to exit the restrictive measures of several countries. However, the dynamics of demand in the futures market, as well as the decline in US bond yields, indicate that the players have not yet seen reasons for strengthening the dollar, since the yen currently looks like a clear favorite.

Data on household spending and wage levels for March will be published on Friday, forecasts are extremely negative, and a further increase in USD/JPY could be stopped by a significant increase in liquidity by the Bank of Japan, but no steps in this direction were presented at the last meeting.

The situation is clearly in favor of the yen. Testing the support of 106.30/40 seems more and more likely. The impulse may turn out to be very strong if it is supported by news of a fundamental nature. It is logical to use a possible increase in resistance 106.80/90 for selling with the first goal of 106.34, in case of breaking through of support, sales should be strengthened, since the yen can move without correction to the support zone 104.70/90.