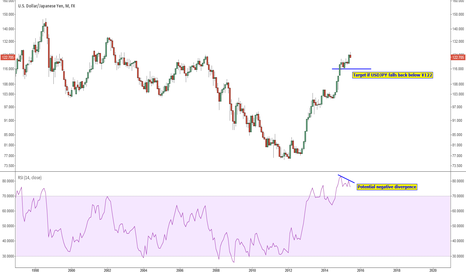 The Federal Reserve indicated yesterday that further improvements in employment data need to be seen before raising rates. While non-farm payrolls have been quite solide in the past couple of months, there is indeed a risk that the Fed holds rates steady in September if this summer’s employment data disappoints. Given the fall in industrial production since the beginning of the year (among other indicators), there seems to be an upside risk to the unemployment rate, which if confirmed would probably lead to further dollar losses during the third quarter. If data forces economists to reconsider their rate hike bets for September, this could lead to a shake out in bullish dollar positioning.

This fundamental scenario is contrary to what the consensus believes, but it isn’t at all absurd to think that market participants are still too agressive in their rate forecasts. With this scenario in mind, I’m interested in the current USDJPY technicals because there might be a negative divergence on the monthly RSI. This divergence needs to be confirmed by a break below ¥122, which would likely lead to the RSI dipping below its current support at 75. Once below ¥122, if the dollar continues to fall after the NFPs release on Thursday, 2 July, this theoretical correction could accelerate, leading to a sharp fall back to the ¥116 handle (with such divergences, a break in the RSI support often leads to prices falling back to the support established before the second bullish leg).

I’ll be watching USD/JPY closely tomorrow (BoJ meeting) and next week for further indications of a bearish reversal ahead of the NFPs release.

TradingView's mission is to give investors an efficient and effective way to find trading ideas from other individual investors. Why is that important? Because combined knowledge of individual investors, like you, is on average better than insight from famous analysts on Wall St. We have seen it again and again when experts talk a lot and have no clear direction. Visit our website HERE
Previous Story

GBPUSD: The Week Ahead (Day 4)