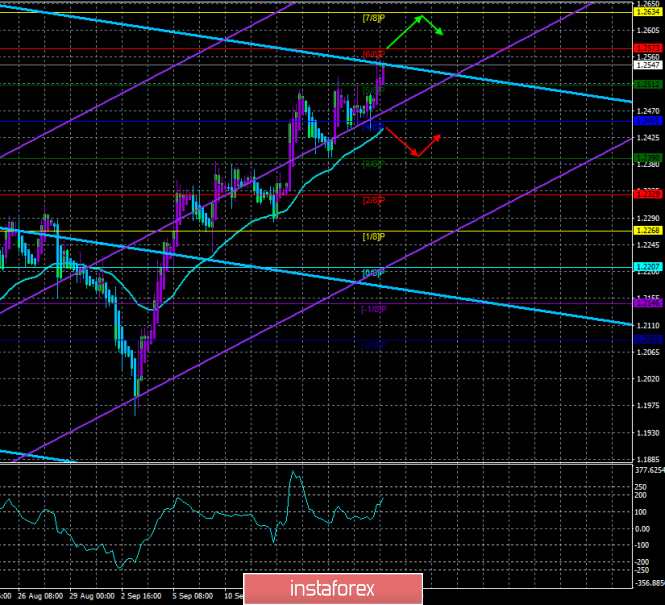 The upper channel of linear regression: direction – down.

The lower channel of linear regression: direction – up.

In recent days and weeks, it seems that there are no problems in the European Union except the British Brexit. And Boris Johnson’s duties include only the daily distribution of interviews regarding Brexit standing on a “dead center”. Yesterday, European Commission President Jean-Claude Juncker said that the parties can still agree on Brexit. Otherwise, “disaster awaits us,” Juncker said. He once again warned London that it is waiting for devastating consequences in the case of a “hard” scenario Brexit, also saying that the European Union is ready for such an option. And now, dear traders, just think, how many times have you heard such statements in recent months? What is the point in them if the Brexit process cannot be completed for three years? If he openly stands still last year? If the UK is mired in a political crisis, and Boris Johnson cannot even establish relations with deputies and get the support of Parliament? Moreover, he continues to openly fight with parliamentarians, not realizing that 450 people are still stronger than one Prime Minister. Five defeats in key issues the 2-month parliamentary vote eloquently indicate who can win in the long run.

Most surprisingly, the pound continues to strengthen against the US currency. It continues to grow despite the failed reports on inflation and retail sales for August. Although the Bank of England has not changed monetary policy. Although the optimistic news on Brexit in recent days, in fact, no. If at first, the pound began to grow on the increase in the probability of transferring Brexit to 2020, now there are few new growth factors for the British currency. However, after each “black” band comes “white”. The pound has been declining against the US currency for a very long time, often purely by inertia, so the pound/dollar currency pair has accumulated a strong oversold. It can be worked out now both by private traders, and major players.

There are no macroeconomic reports scheduled for the last trading day of the week in the UK. However, unlike the EUR/USD pair, this does not mean that today will be boring and uninteresting. As you can see, in the Asian trading session and at the beginning of the European, the pound shows strong growth, which can continue throughout Friday, September 20. The technical picture indicates an upward trend and no correction. The lower channel of the linear regression is pushed up, as is the moving average line. A reversal upward of the senior channel will mean a change in the direction of the global trend.

The GBP/USD pair continues to move upwards. Thus, traders are now encouraged to continue buying sterling with targets of 1.2573 and 1.2634, the first of which has already been worked out. It is recommended to sell the pound not before fixing the pair below the moving average.

In addition to the technical picture, fundamental data and the time of their release should also be taken into account.

CCI – the blue line in the indicator regression window.

Source:: Overview of GBP/USD on September 20th. Forecast according to the “Regression Channels”. The British pound “tears and thrashes”