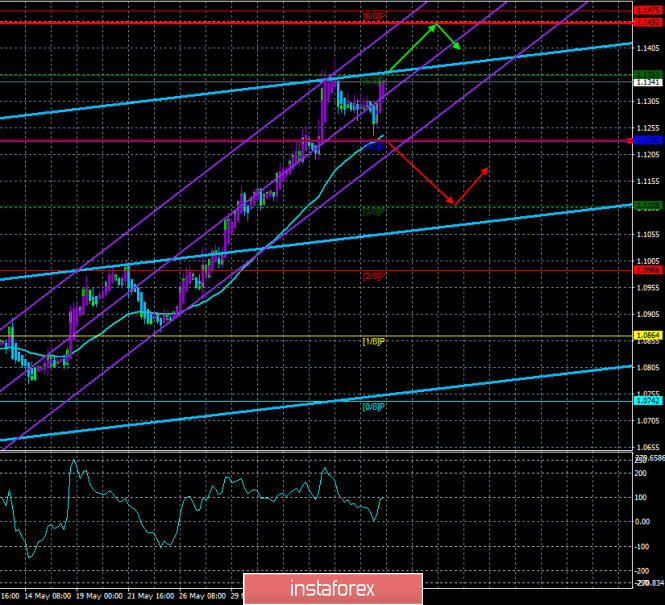 Preview: There are many possible reasons for the fall of the US currency in recent weeks. One of them is the aggressive policy of the Fed to ease monetary policy and stimulate.

The EUR/USD currency pair continues to adjust with great effort at the beginning of the new trading week. In the final article of the last day, we once again focused the attention of traders on the fact that it is now impossible to say exactly what topic “lowers” the US dollar. It is impossible to name a certain factor that led to a sharp depreciation of the US currency. However, recently there has been another possible reason for the fall of the dollar, which is unlikely to “act” independently, most likely, it complements the package of reasons that provoked the fall of the dollar. This reason is the Fed. It was the Federal Reserve, together with the US Congress, that adopted and started implementing trillions of programs to support the economy without any problems. If the European Union has adopted only “basic” packages and can not accept new incentive programs, then there are no problems with this in the United States. It is reported that in the first quarter of 2020 alone, the Fed printed more than $ 2 trillion and sent it to the economy. Thus, the supply of American currency in the free market has grown banally, which could cause a fall in the exchange rate against, for example, the euro, which remained the same amount. Of course, again, it is unlikely that it was in the last 10 days that the Fed strenuously printed and poured trillions of dollars into the economy. This is still a slow process. However, this is another possible reason why the dollar is now devaluing, when there are no visible fundamental reasons for this. So, if it weren’t for a huge pile of various problems, Donald Trump might be rubbing his hands gleefully right now. The dollar is falling for once, which is what the American president wanted to achieve from the first day of his rule. However, along with maintaining the economy with cash, the notorious American public debt is also growing, which is already 26 trillion at this time. However, the entire world has been “gossiping” about the US national debt for many years, and this is an undying topic for discussion.

However, even this hypothesis does not fully explain what is happening now in the international currency market. If the euro and the pound are growing because of the banal imbalance in the supply of these currencies and the dollar, why is the Japanese yen not growing? Or is it because there is no demand for it at this time? In general, we believe that this factor (quantitative stimulus programs for economies, any other programs that focus on buying securities and flooding economies with cash) should be taken into account. For example, if the Eurogroup this week comes to a consensus on the formation of the EU economic rescue fund, it will also mean that a certain amount of the euro currency will simply be printed. And the more the Fed and other central banks expand their balance sheet, the higher will be the supply of these currencies on world markets. At the same time, knowing this factor does not allow us to predict the end of the fall of the dollar. That is, formally, it can decline for a very long time, just as the Fed can indefinitely expand its balance sheet and buy bonds and other securities.

In addition to the unlimited program to support the economy, the Fed may still move to negative rates in the near future. Despite the fact that Jerome Powell has repeatedly stated that such a step is pointless, some analysts believe that the Fed has no other choice. Analysts believe that the US economy is in a deep recession and the Fed will have to continue to stimulate it in all possible ways. At the same time, when the dollar began to devalue in the world currency markets, this may force US external creditors to start getting rid of US government bonds, considering them unnecessarily risky at this time. And we are talking primarily about China, most of whose reserves are located in American securities. According to Chinese media reports, Beijing has already begun a cautious sell-off of American treasuries, which, of course, can not be a positive moment for the US, in the midst of the financial crisis, which in China itself is much lighter. Also, the simplest mathematical calculations suggest that the Fed’s balance sheet will swell to $ 10 trillion by the end of the year, and this is far from the limit, since no one knows what course the “coronavirus crisis” and the epidemic itself will follow, for which there is still no vaccine.

Thus, the Fed may hypothetically make several important decisions in the near future to further ease monetary policy. Summing up the results of the next meeting of the US Central Bank will take place today, however, analysts and traders do not expect any changes in the parameters of monetary policy. Thus, more important will be the speech of Fed Chairman Jerome Powell, who can share with the regulator’s plans for the near future and with his assessments of the state of the economy and its prospects. Also scheduled for today is the publication of the consumer price index in the United States, which at this time does not have any significance. Recall that for inflation, many central banks around the world are guided during the adjustment of monetary policy. However, there is no talk of economic growth now, and the process of slowing inflation is absolutely logical for the current crisis. Therefore, it should not surprise anyone that the consumer price index is likely to fall by the end of May to 0.2% in annual terms. The core consumer price index will not fall as much to 1.3% y/y. In addition, today there will be a speech by ECB Vice-Chairman Luis de Guindos, who can also tell the markets some interesting information.

As a result, we have a correction of the euro currency, which is called “with grief in half”. The euro/dollar pair did not even manage to reach the moving average line, which passed halfway to meet the price itself. Thus, the buyers’ positions remain very strong, while the bears’ positions remain extremely weak. All technical factors now point to the continuation of the upward trend, so we recommend trading according to technical analysis and only look at the fundamental and macroeconomic factors. 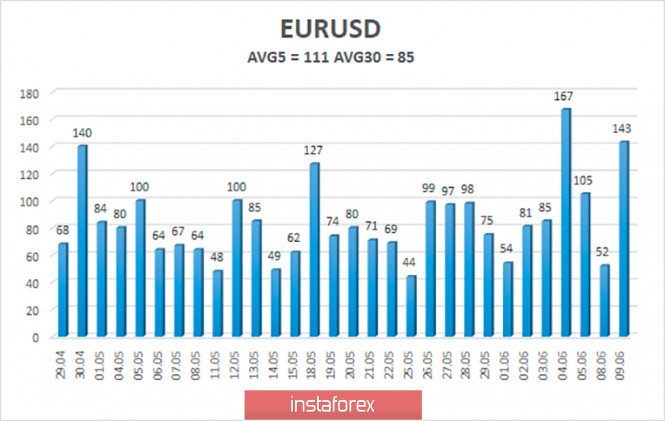 The average volatility of the euro/dollar currency pair as of June 10 is 111 points. Thus, the indicator value is characterized as “high” due to the last four trading days. We expect the pair to move between the levels of 1.1230 and 1.1452 today. The reversal of the Heiken Ashi indicator downwards signals a new round of downward correction.

The EUR/USD pair resumed its upward movement. Thus, long positions with the goals of 1.1452 and 1.1475 remain relevant at this time. It is recommended to keep them open until the beginning of a new round of corrective movement. It is recommended to return to selling the pair not before the price is re-anchored below the moving average line with the first goal of 1.1108.

Source:: Overview of the EUR/USD pair. June 10. The Fed can resort to negative rates. The dollar may be under pressure due to the