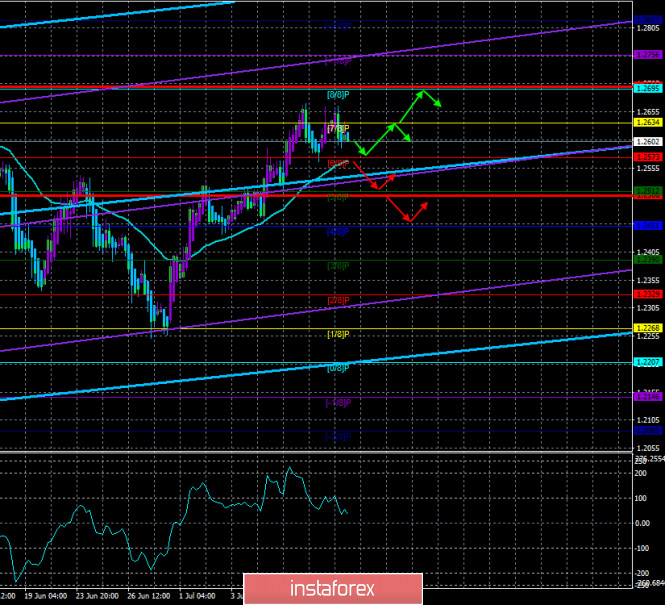 The British pound spent the first trading day of the new week in a new round of corrective movement. Buyers did not find the strength, and in the news feed – the reasons to continue buying the British currency and selling the dollar. However, this does not mean that the upward trend is complete. At the moment, the pound has fallen by only a few dozen points and failed to work out even the moving average line, which is considered the main goal in the “linear regression channels” system for all corrections. Thus, the upward movement may resume on Tuesday. Recall that the main helper of the British currency is now America. It is the current situation across the ocean that does not allow traders to buy the US currency. First of all, we are referring to the “coronavirus” epidemic, which does not abate at all and only acquires new and new scales. In the second place, we are talking about the confrontation between China and the United States, which is still flaring up. There are a huge number of contentious issues between Beijing and Washington, so it is not worth expecting to establish relations in the coming months. Plus, we should not forget that China is not a fan of the current US President and is waiting for a change of power in the country to have a dialogue with the new President, who is most likely to be Joe Biden, who has always been favorable and friendly to China. Third, we are talking about a political crisis, about Donald Trump, whose ratings have declined significantly in 2020, and the fans of his manner of doing business have noticeably decreased. These factors allow the British currency to strengthen so far. However, we will remind you once again that the British pound is unlikely to be able to go far on these factors. These factors are strong, however, the situation in the UK is no better. From 2021, British businesses will have to trade with EU countries under WTO rules, that is, with tariffs, quotas and duties. Brexit will be “tough”, which the UK Parliament fought against for three years, and the British are likely to expect higher taxes and fees since somehow the UK government will need to patch the holes in the budget that caused the “coronavirus crisis” and Brexit. Thus, the welfare of British people is likely to continue to deteriorate in the coming years. And with it, attitudes toward conservatives may begin to deteriorate…

Meanwhile, the theme of the China-US confrontation has developed. As it became known on Monday, Beijing responded to Washington’s sanctions, which it imposed earlier because of the oppression of Uighurs in the Xinjiang region. China has decided to impose mirror measures against American officials, which will include several Republican senators, several other representatives of the US Congress, as well as the entire congressional Committee on relations with China. “This law deliberately distorts the human rights situation in Xinjiang, viciously discredits the policy of the Chinese government, violates the basic norms of international law and international relations, and is a gross interference in the internal affairs of the PRC. The Chinese government and people express strong indignation and strongly protest,” the Chinese Foreign Ministry said in an official statement.

At the same time, former assistant to US President Steve Bannon in an interview with the British newspaper Sunday Mirror said that some employees of the laboratory in Wuhan have fled the country and are now cooperating with Western intelligence services. According to Bannon, lab workers in Wuhan, where the COVID-2019 virus was released, are presenting evidence of the Chinese Communist Party’s guilt in the incident. Bannon also said that US intelligence, along with British intelligence, is thoroughly investigating the case and collecting evidence of China’s guilt to prepare materials for the court case. It seems that the tension between the United States, Britain, and China continues to grow.

On the second trading day of the week in the UK, several fairly important macroeconomic publications are planned. First of all, we recommend paying attention to the GDP for May. It is expected to grow by 5%. On the one hand, this is a good figure, on the other – it still needs to be achieved, and against the background of losses a month earlier, 20.4% is a negligible recovery. Recall that it is the British economy that will suffer the greatest losses in 2020 among the EU countries. Therefore, +5% of GDP in May is unlikely to overwhelm the optimism of buyers of the pound. Moreover, the pound is now growing not due to statistics or “foundation” from the UK, but due to low demand for the US currency. Industrial production for May will also be published with a forecast of -20.9% y/y and +6% m/m. The same can be said about these figures. After the strongest cuts of all macroeconomic indicators in April, the currently expected gains look just like a small pullback, rather than the beginning of economic recovery. Thus, we believe that all these important data in conjunction with US inflation will be ignored by market participants, and the pair’s movement will continue following technical factors and the overall fundamental background.

And the fundamental background for the British pound remains sharply negative. We believe that as soon as the situation in the US improves a little (if this happens), the British pound will immediately begin a new round of decline against the US currency. Too much pressure has now formed on the British economy and in recent years this pressure has not eased. And in 2021, it can only increase, as we have repeatedly said. The fact that the negotiations between the groups of David Frost and Michel Barnier failed is no longer of interest to market participants. Who is interested in learning about another failure and lack of progress? Thus, in principle, we can safely expect the moment when Boris Johnson will announce the termination of negotiations with Brussels, as he promised earlier.

As for other factors, both channels of linear regression are currently directed upwards, as is the moving average. Therefore, all trend indicators now indicate an upward trend. Based on this, we expect a move to the previous local maximum of about $ 1.28. Only the consolidation of quotes under the moving will allow us to consider the option of ending the upward trend. 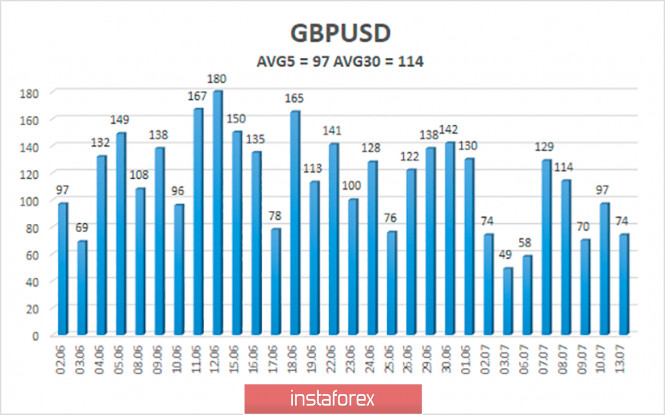 The average volatility of the GBP/USD pair continues to remain stable and is currently 97 points per day. For the pound/dollar pair, this value is “average”. On Tuesday, July 14, thus, we expect movement inside the channel, limited by the levels of 1.2506 and 1.2700. Turning the Heiken Ashi indicator upward will indicate a possible resumption of the upward movement.

The GBP/USD pair started a new round of downward correction on the 4-hour timeframe. Thus, today it is recommended to open new buy orders with the goals of 1.2695 and 1.2756, after the reversal of the Heiken Ashi indicator to the top. It is recommended to sell the pair after fixing quotes below the moving average with the first goals of 1.2512 and 1.2451.

Source:: Overview of the GBP/USD pair. July 14. China is imposing retaliatory sanctions against the US. The British pound continues