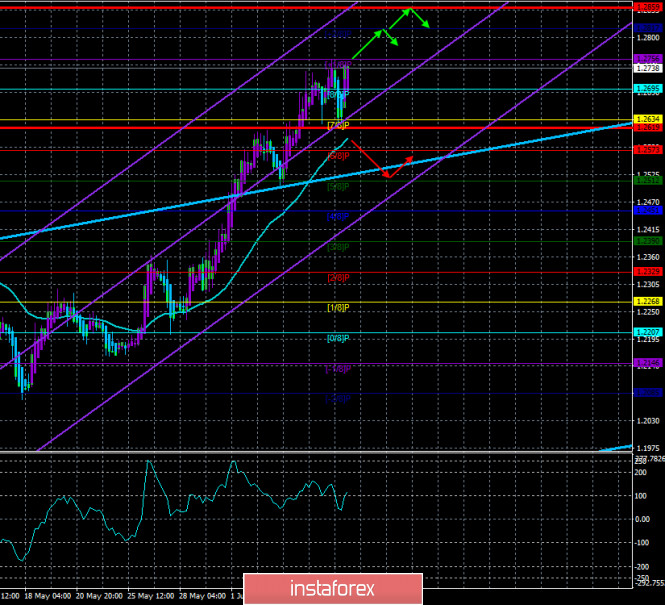 The British pound on the second trading day of the week made another painful attempt to adjust to the moving average line, which again very quickly went to nothing. However, the buyers of the pound/dollar pair immediately cheered up and the British currency again flew up out of the blue. The highs of the previous day could not be updated, however, a solid increase in the British currency was again recorded. What could be the reason for this on Tuesday, June 9? The same as in the previous 10 days. No. It is unlikely that the pound is growing on the news of another failure of the Brussels-London negotiations. Yes, in principle, it can not grow now on any news from the Foggy Albion, because no positive news is coming from there. And lately, there’s been no news at all. We do not consider it news that the groups of Michel Barnier and David Frost have not agreed on anything. They have not agreed four times since the beginning of March. Perhaps Boris Johnson will be able to change the situation when he goes to Brussels in person, however, we would not count on this either. What can Johnson offer to the European Union, which David Frost can not offer? Most likely, Johnson will try to personally persuade the EU leaders to make concessions, however, what’s the point of giving in to the Alliance if London itself does not want to give in to anything? In general, this topic can not provide any support to the British currency. However, the flow of negativity from the United States has already dried up. In recent weeks, many traders have linked the dollar’s rise to the turmoil in the US. We mentioned a lot of possible reasons, some of them have already been leveled and stopped working, and the pound has been growing and growing. Thus, the reasons for the growth of the UK currency, of course, lie in the United States. However, no one can now say unequivocally what are the reasons for this.

Meanwhile, the topic of the confrontation between the US and China does not leave the front pages of periodicals at all. However, the latest news suggests that Beijing is really serious about ending the democratic status of Hong Kong and taking it completely under its jurisdiction. Probably, China considers Hong Kong a kind of “back door” for enemies to China, since Hong Kong is now an autonomous region, has its own laws, its own judicial system, its own currency, and its own language. Hong Kong also has US trade preferences, and the trade turnover with the United States alone is 66 billion per year. Probably, Beijing believes that the United States has an influence on Hong Kong, and perhaps not unreasonably. One way or another, Beijing is going to pass the law and will most likely do so. If this happens, there is no doubt that a new “battle” will begin between the United States and China. However, this time the confrontation may concern not only these two countries. The fact is that it was with the UK that the agreement on the autonomy of Hong Kong was signed in 1984. Officially, London has already expressed its position. If Beijing passes a law on “national security in Hong Kong”, London will allow all residents of the autonomy to obtain British citizenship. Since Beijing clearly wants to be able to subject Hong Kong and its residents to Chinese laws, as well as to be able to extradite to mainland China any resident of the autonomous region, it naturally does not want this any resident to be able to obtain British citizenship and become a subject of the Queen at any time. As usual, Chinese officials “express hope” that London will not interfere in Hong Kong’s affairs. The same hopes are expressed for Washington. Naturally, the official version of Beijing sounds like this: “the law being developed on the protection of national security will be designed to hold accountable all those who threaten the peaceful life of the autonomy and China. This law will be aimed at ensuring the rights and freedoms of residents of the district and foreigners.” It sounds beautiful, however, it just sounds. In fact, this is not the case, and that is why London and Washington, with the support of other European countries, are preparing retaliatory strikes against Beijing.

In fact, if Washington revokes Hong Kong’s special status, it will no longer be a separate district and will simply be part of China. This means that it will trade with America on the general rules using duties, and will fall under “American sanctions and duties”. The same may apply to its relations with other countries of the world. Thus, from the status of a global financial center, Hong Kong can quickly turn into an ordinary Chinese city, and the confrontation between the United States, China, and, this time, other countries of the world, can last for years.

To date, no macroeconomic statistics are planned for the UK again. Therefore, traders will again have to study only data from overseas, which, however, is not much they need now. However, market participants cannot skip the Fed meeting and its results. If Jerome Powell presents a surprise, it may be reflected in the chart of the currency pair. In general, we continue to recommend paying increased attention to technical factors, since they are the ones that play the greatest role now and best visualize and predict. The upward trend is visible to the naked eye. Both linear regression channels and the moving average are directed upwards. Therefore, trading for an increase remains relevant. 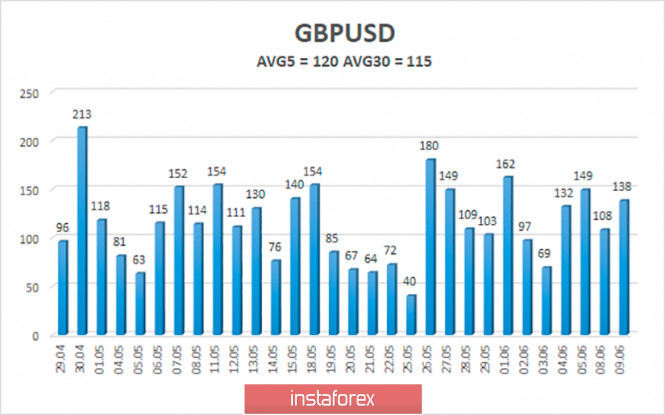 The average volatility of the GBP/USD pair continues to remain stable and is currently 120 points. For the pound/dollar pair, this indicator is “high”, but not too high. On Wednesday, June 10, thus, we expect movement within the channel, limited by the levels of 1.2619 and 1.2859. Turning the Heiken Ashi indicator down will indicate a new round of corrective movement.

The GBP/USD pair resumed a strong upward movement on the 4-hour timeframe. Thus, today it is recommended to continue trading the pound/dollar pair for an increase with the goals of 1.2817 and 1.2859 and keep buy positions open until the Heiken Ashi indicator turns down. It is recommended to sell the pound/dollar pair when traders manage to return to the area below the moving average, with the first targets of 1.2512 and 1.2451.

Source:: Overview of the GBP/USD pair. June 10. The love triangle “USA-Hong Kong-Great Britain” may leave a scar on the global economy.