The Relative Strength Index (RSI) is one of the most powerful, yet underused technical tools in the Forex market. If you are already familiar with it, this article will be a refresher, plus teach you a new way to translate this tool over to the binary options market. If you’ve never used RSI before, this information may open up a brand new trading strategy for you.

RSI is a momentum indicator. It measures the strength at which an asset is being bought or sold. It is not the same as price. Oftentimes, they will move in lockstep with one another, but not always. When these differences occur, it is usually time to act. The general rule of thumb is that when RSI signals move above 70 or below 30, noticeable changes are about to occur. These numbers are somewhat arbitrary, but thanks to this generally agreed upon rule and the phenomenon of trader psychology, these methods work most of the time.

When the RSI is up above 70, it is an indicator that the asset is overbought and that the price is likely to drop soon. When it’s below 30, then the asset is oversold, and likely to go up. Taking out positions to reflect these expected changes is smart. However, when translating this to the binary options market, things are not always this clear cut thanks to the addition of expiration times. This is a barrier to many, but at the most, it should just be a speedbump. It’s something that you can easily adapt your trades to.

Let’s look at a quick example of how to do this. 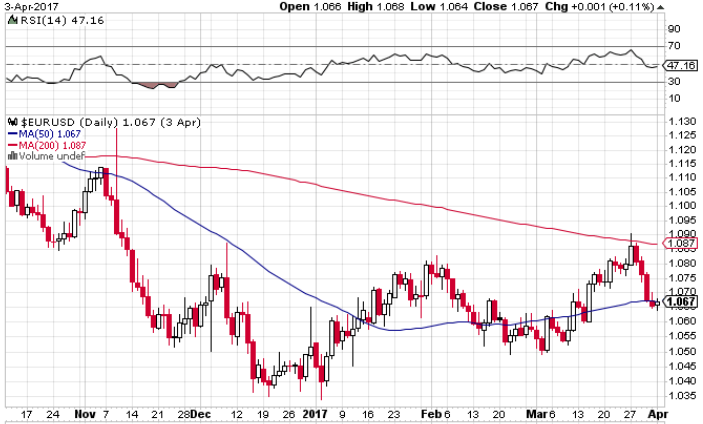 (Price chart for EUR/USD with RSI)

The EUR/USD price chart above shows six months of data. If you look at the top portion of the chart, you can see how the RSI oscillates up and down, often reflecting changes in the price. But the price and the RSI do not always move in the same way or with the same magnitude.

Toward the end of November 2016, the EUR/USD moved into what would be considered “oversold” territory. The RSI was below 30, as indicated by the shaded portion. The actual price began to rise shortly afterward, only to begin falling again. However, when the price fell again, the RSI did not show that the asset was oversold, and it took almost two months before the price levels reached the same point.

As you can see, the dip below that 30 line triggered a quick rise in price. The increase took a few days to occur, and it was dramatic in fashion, being marked by several white candlesticks in a row.

Later in the chart, we see the RSI approaching an oversold point. Toward the end of March 2017, the RSI inched close to 70 before it fell again. We can see the price drop from roughly 1.09 to current (as of this writing) levels of about 1.067. Even though the RSI never crossed that magical 70 line, the conditions triggered a selling off of the pair.

It’s also worth noting that even though the price of the EUR/USD was not as high in March as it was back in November, the RSI was higher. As mentioned before, these two things move closely together, but they are not perfectly correlated.

Forex traders familiar with RSI already know that when conditions are overbought, you go short on the pair. When conditions are oversold, you go long. But when using RSI within the binary options market, it is a slightly different story. The basics are the same, and that helps make our job a lot easier. If you have used this tool with success in the Forex market, the transition to using it in binary options will not be difficult.

The “secret” to success is in the timeframes being used. In the example given above, we see daily candlesticks. Using 15 minute binary options with only the above chart would most likely result in losing money. Even if you were able to create a 52 percent rate of accuracy with your trades, which is slightly better than a random outcome, you would lose money overall thanks to the cost of binary options trading. We want better than that when trading, and you do too. The whole point of trading is to make money, not base our outcomes on random luck.

To be a successful binary options trader, you need to use the appropriate tools for the given situation. If you were to use an end of day expiry along with this chart, your profit rate would have been much higher. Looking back at November when the overbought conditions began, you should have started taking out call options with an end of day expiry. There would have been a total of 9 trades made during this stretch of time. 5 would have been correct, 4 incorrect. Given an 81 percent rate of return (realistic at most binary brokers) and a standard $100 risked per trade, you would have lost $400 and earned $405 to profit $5.

Here’s how we recommend adjusting to this. As the RSI goes closer to 0, the oversold conditions are creating more tension, and the odds of the price rising go up. If you want to keep the $100 standard, you are risking the same regardless of your likelihood of success. But by risking more when you have a better chance of success, you are using your money more wisely.

As the RSI here decreases and the odds of a price increase go up, you should begin risking more. Once it drops under 25, increasing your risk by 50 percent would have helped you to be more profitable. This would apply to days 3, 7, and 8. Quickly doing the math, this increases profits from $5 to $126.50. Simply by looking at RSI and using it to help make decisions not just on trade direction, but also the amount risked, we can create a better situation and use the binary options tool to our advantage.

Please keep in mind that these price amounts can be altered to fit your budget constraints. Most binary options brokers allow you to risk somewhere between $10 and $25 as a minimum amount per trade. Feel free to customize away from the $100 as you see fit.

There is an important final thing to note here. With one day trades, you will make fewer trades than if you were using 15 minute trades. This is tough for some traders used to making dozens of trades per day. This strategy works only if you can be patient and find ideal situations. But by using that patience to increase your profit rate, you are moving ahead as a trader.

Central Banks 101: Everything A Forex Trader Needs To Know