Stochastics Oscillator – A versatile oscillator for a trend following strategy

By John Benjamin at Orbex

The Stochastics oscillator, developed by George C Lane has stood the test of time and is often a preferred choice of oscillator for traders. Whether you are scalping the markets trading range breakouts or whether you trade a trend following strategy, the Stochastics oscillator fits in equally well with either of the strategies. This strategy falls into the category or a momentum indicator. What many fail to understand however is the fact that this indicator doesn’t follow price but the speed, or momentum. The oscillator works on the principle that rising or falling momentum often precedes reversals. By reversals, it could be a short term correction as well as a trend change.

How does Stochastics Oscillator works

The oscillator is made up of two main variables, the %k and the %d.

The %d is a 3 day simple moving average of the %k.

By default, the indicator comes with a setting of 14 periods but it can be changed, with the most common settings including 5, 13 or 21.

The %k is obviously the most important parameter as it does the heavy lifting in terms of measuring the momentum by comparing the current closing price in relation to the highest high and lowest low.

A rising momentum should not be mistaken for a rise in prices. In other words, during rising momentum prices can continue to rally or decline and only when the momentum slows down, does it signal a potential reversal (or correction) to the previous direction.

The most common use of the oscillator is that because it ranges between 0 and 100, it can be used to signal overbought or oversold signals. The levels of 80 and 20 are most commonly used levels. However, just because the Stochastics rises above 80 level does not signify a dip back below 80 and the same holds true when the oscillator enters the oversold level of below 20.

The chart below shows a closer look at the indicator compared to price. You will notice that price tends to rise and fall depending on the rise and fall in the momentum depicted by the oscillator. As mentioned, the indicator can be good to identify reversals and it is even more pronounced when the oscillator rises or falls from the Overbought or Oversold levels of 80 and 20. 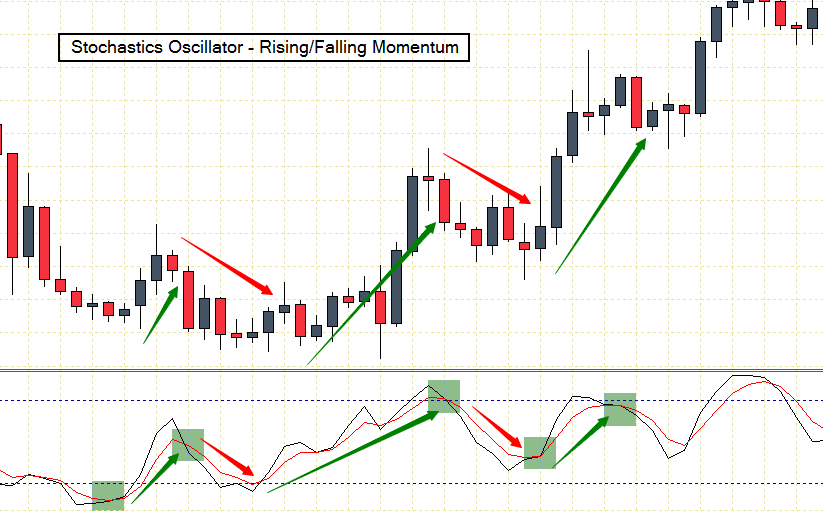 The advantage of using this strategy can be best illustrated in the following example of trading break outs.

In the next chart below, notice how prices have been trading sideways, denoted by the vertical dotted lines. Price was trading sideways within the support/resistance levels within a narrow band. So, a break out trader would typically look to either buy to the upside breakout or sell to the downside breakout. But as any experienced trader would know, breakouts are never clear and there is always a risk of a fake break out.

Using the oscillator, we get a clear understanding. Here, we notice that after the break out candle that broke to the upside, price action continued to rally. However, the indicator pointed to an exhausting momentum, which was also confirmed by the doji candlestick pattern as well. Prices briefly floated lower before the Stochastics started pointing to a buildup of momentum.

When the %k crossed above the %d (the 3 period moving average), it signaled the start of renewed momentum and thus confirmed a continuation to the upside.

Taking the above into context, traders would have had a much stronger confirmation of the buy signal when the Stochastics pointed to a renewed bullish momentum after the initial breakout. There are three main advantages here. 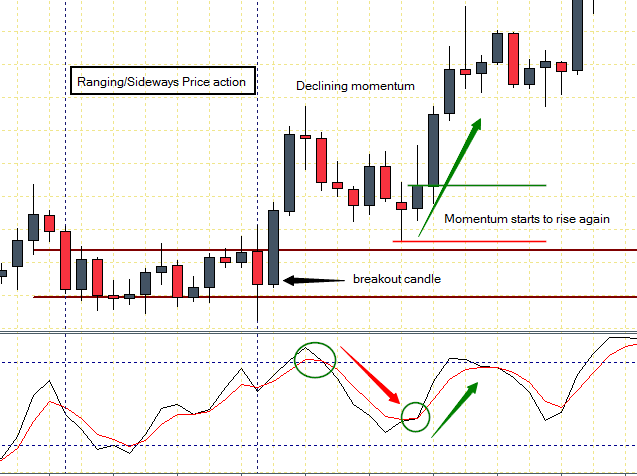 As we can see from the above example, the oscillator can be used as a confirmation to a trade bias. Instead of trading merely buying and selling off the OB/OS levels, applying the forex indicator in a more meaningful way can offer great potential for traders who exhibit the right characteristics.

Seven Announcements to Watch When You Trade

All in One Night: Overnight Trading Explained

How to Utilize Oscillators