The EUR/USD may return to sales soon 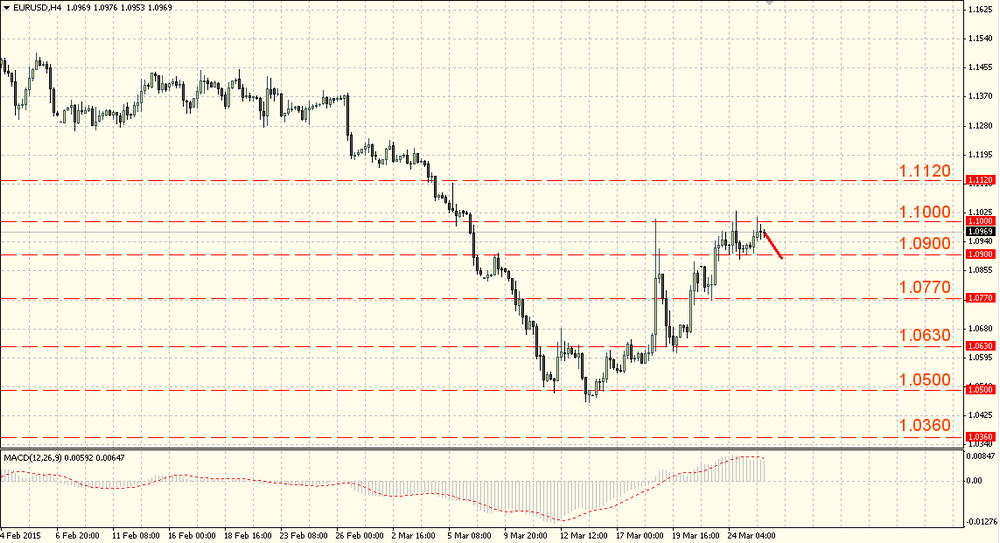 The euro tried to continue its growth against the dollar at the previous trades. The March German Ifo Institute report was expected with the indicators’ improvement – the business sentiment was anticipated with a growth to the mark of 107.3 after the previous 106.8. The indicator went better than expected and amounted to 107.9 in March.

MACD is in a positive territory.

The pound was the most vulnerable assert against the dollar at the previous trades. At the end of the day the pound recorded the biggest losses against the US dollar as compared to other majors. According to the UK report the February number of jobless claims has grown to 37,300 from 36,500. The Bank of England Monetary Committee member Shafik said that interest rates were likely to be increased, but not decreased, despite the current low inflation level. Shafik said that inflation below 2% was caused by the mostly external factors that had temporary nature: the import prices and the oil prices sharp decline as well as the pound growth.

At the last session there were no changes with the pound/dollar. Bulls could not even test the psychological level of 1. 5000-1.5020 as sellers became active, leading to the pair’s decrease below the level of 1.4880-1.4900. The price slightly rose and tested this level, but unsuccessfully.

The risks of the pair decrease resumption and the current support break are rather high. Shall that happen we expect a decrease towards the 47th figure. The pair ability to rise up and consolidate above the 49th figure will increase chances of 1.5000-1.5020 testing and breakthrough that is currently very uncertain.

The Japanese yen held the previous session in multidirectional fluctuations against the dollar and closed the session almost at the opening prices. The Japan news showed one of the inflation indicators decrease- the February corporations’ price index slowed growth and fell to 3.3% y/y from 3.5% y/y. The pair USD/JPY was sold off during its decline towards the support near 119.05-119.25 and then the pair rose. The increase was short-term and the pair again tested this level.

While the pair is above 119.05-119.25, the chances of growth resumption and the 120th figure breakthrough will be preserved. The loss of this support will open the way towards the 116th figure.
Check the website for more information: https://freshforex.com/analitics/fresh-forecast/fa/issue_60884.html