The gold is caged 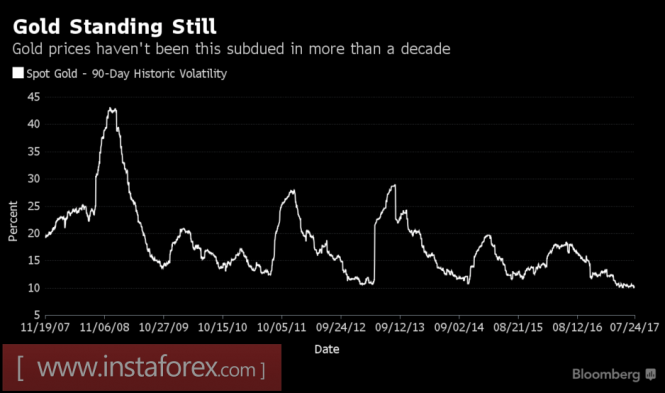 Having completed the week ending July 21 with the best results for the last two months, gold began to retreat amid rising yields on Treasury bonds and positive statistics on business activity and consumer confidence in the US. This recent successes are connected to the deteriorating political landscape in the United States, the fall of the USD index, and the rates of the US debt market. By the end of July, the situation had changed a little.

Despite the Republican vote losing in the Senate over the abolition of Obamacare, the matter got off ground and increased the chances of passing tax and budget reforms through Congress. This immediately affected the growth of treasury bond yields. If Donald Trump manages to realize at least a part of his election promises, then restoring confidence in the US president can return fans of the US dollar to the market. Indeed, if the idea of accelerating GDP to the level of 2.6-3% is looming on the horizon, gold will have to be unhealthy because it loses to risky assets.

Over the past four months, the XAU/USD quote dangled within 7.6% of the trading range, the narrowest in the last 10 years. The 120 day historical volatility, which, against the background of the referendum on Britain’s membership in the EU, reached a two-year peak, has since collapsed by 10%, descending to the very bottom last seen in 2005. The low volatility of quotations is not the best factor for bulls in precious metals. In similar situations, as a rule, global appetite for risk increases. This means that gold cannot compete with assets such as shares if the waters in the financial markets are calm. Another thing is the storm which increases the demand for asylum. Simply put, if there were no scandals around Trump, the XAU/USD quote could well have dropped below $1,200 per ounce.

Dynamics of historical volatility in gold.

Standard Chartered, on the contrary, believes that the “dovish” comments of the Fed following the July FOMC meeting will allow prices to rise around $1,300 per ounce. Probably, the company is betting on a weak dollar. The strengthening of the correlation has lately had a serious support from the buyers of precious metals. In my opinion, the euro looks oversold and needs correction, especially in the ECB’s slow pace in monetary policy normalization and the deterioration of business activity in the euro area. In this regard, the “dovish” comments of the Fed can become a signal for locking in profits on long positions for EUR/USD. This will trigger a pullback.

We should not rule out the possibility that the financial markets will not respond to the FOMC statement since this event refers to those with zero risk. The futures market does not believe in an increase in the federal funds rate. Moreover, the Committee is unlikely to accelerate the normalization process in the context of slowing inflation.

Technically, “bears” for XAU/USD are trying to return beyond the neckline of the pattern “head and shoulders”. If they succeed, the subsequent support tests at $1,228 and $1,218 per ounce will strengthen the risks of restoring a short-term downtrend. 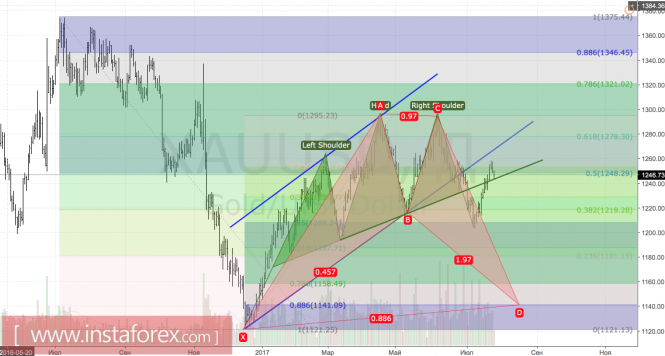 Source:: The gold is caged

The fundamental weakness of the dollar