It seems that everyone wants to trade breakout and trending strategies, aiming for outsized large directional moves. Is this really the best way to trade Forex? A careful investigation of historical Forex data reveals quite the opposite: that although currency pairs have a propensity to trend, they have an even stronger propensity to revert to a mean. Implicitly, this is well known and respected by phenomena such as the popularity of indicators such as Bollinger Bands, which are based upon measurement of a local mean. Are there reasons, except for the obvious psychological ones, why traders generally prefer trend-based to mean reversion-based strategies?

The major problems that are correctly identified as primary reasons not to trade mean reversion strategies are:

It is possible to take a better approach and avoid – or at least significantly eliminate – the impact of all these problems by taking the following measures:

It is often said that markets are fractal. This would mean that, if technical analysis is valid, price patterns that are equal (relatively speaking) would tend to produce similar results, regardless of the time frame they are observed on. Unfortunately, although it would be great for traders if price really was fractal, it simply is not, and one way an advantage can be gained is by developing strategies on appropriate time frames. For retail traders living with retail standards of execution, this is done most easily by being prepared to use longer time frames.

An analysis of the previous decade shows that trends that have been in existence for 3 calendar months have had a propensity to maintain the trend for the subsequent calendar month. This could have been combined with an exploitation of the market’s mean reversion tendency to produce a powerful strategy. For example, if a currency pair moved by more than 2% of its value in one week against its 3 month trend, by expecting a mean reversion over the following week in the direction of the trend, a profitable and simple strategy presented itself.

The principles outlined previously can be applied by simple entering a trade at the opening of the following week, and closing it at the end of the week, using no target or stop loss. Conducting a back test with 24 of the most popular currency pairs over an 11 year period, from April 2003 until April 2014, produced the following results shown below. The different percentage values are the results using different trigger amounts to define weekly counter-trend moves after which a trade would be taken.

The results were as follows:

It can be seen that while there are fluctuations in the equity curves, they are meaningfully smoother than would be seen in almost any trend-following strategy applied over the same time period.

If such a strategy were followed blindly, from the results it is clear that de-leveraging or some form of hedging would be advisable.

Adam is the Chief Instructor at fxacademy.com and trades forex on his own account. He has worked in financial markets for over 12 years, including six years with Merrill Lynch.

Tactics for Managing a Trade in a Range 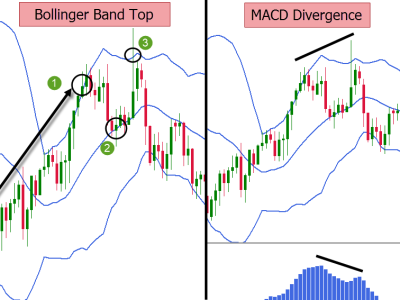