Trading Gold – What are your options?

When it comes to commodity assets, gold ranks as probably the most traded commodity in the world after crude oil. Gold can be traded at two specific times during the day, which tallies with the trading hours of the asset on the Chicago Board of Exchange (for open outcry floor traders) as well as on the eCBOT electronic exchange for online traders.

There are specific contract specifications for gold, which is listed in a pairing with the US Dollar as XAU/USD on many commodity trading platforms. The margin requirements are usually larger than is obtainable for currency assets in the spot forex market. For this reason, mini-contracts have been created which make the margin requirements more accessible to traders on the retail end of the market.

Gold can be traded on the basis of fundamental and technical analysis. Gold mostly responds to fundamental influences that cut across economic and political events from across the world. These fundamentals are those which define risk sentiment in the financial markets.

Gold is seen as a risk-off asset, which is used as an asset protection strategy when other forms of investment are deemed too risky or not profitable enough to trade. Therefore, we tend to see traders buying more into gold when there are poor growth forecasts, problems with sovereign debt such as the type seen in Europe since 2010, credit risks and negative market contagion.

There are three main fundamental drivers of gold prices:

Demand for gold is a driver of gold prices. Since the supply of gold is relatively stable, demand for the asset is the driver for gold prices when this factor is considered. Falling demand will result in price drops, while rising demand (which in itself is caused by some of the other factors mentioned below) will cause prices to rise.

Currency depreciation and devaluation can cause gold prices to rise. Presently, major world oil producers such as Russia and Iran are under economic sanctions which have caused their currencies to depreciate heavily in the last few months. This has driven a rise in demand for gold from investors in these two countries, which has led to an increase in gold prices.

Uncertainty in the global economy or faltering financial markets is another reason why gold prices may rise. In 2014, gold prices actually fell because the various quantitative easing programs implemented by the central banks caused stock markets to achieve record highs. With the stock markets proving to be a viable investment, there was no need to buy gold as a safe haven and so prices actually fell. Compare this situation to 2011/2012 when the sovereign debt crises in the Eurozone and faltering markets that were still struggling to overcome the 2008 global financial crisis led to gold surpassing the $1,800/ounce mark.

Understanding what fundamentals are at play will help a trader decide on what direction gold can be traded.

When direction of the gold market has been ascertained via fundamental analysis, it is left to the trader to determine how and where to get into a gold trade on the basis of the direction which has been imparted to the asset by fundamental factors. Technical analysis can be done in a variety of ways. One method is by the use of chart patterns. There are several chart patterns in the market, one of which is the symmetrical triangle. An example of a symmetrical triangle forming on gold between October and December 2012 is shown below: 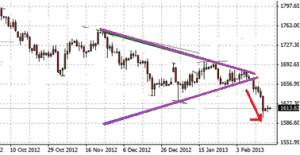 Such setups are an example of how traders can perform technical analysis on gold and implement trades on the asset based on their analysis. Gold trading can easily be done on the platforms of easy-forex.