USD/CAD Turned To The Downside

The currency pair dropped and resumed the yesterday’s minor bearish candle. Price dropped today as the USDX has slipped lower as well. USDX squeezed in the last hours as we had some good US data in the afternoon, the index maintains a bullish perspective despite the minor drop. The dollar index stays above the 94.50 psychological level and could resume the upside movement as the Federal Reserve has left the door wide open for another hike in December.  The dollar dropped sharply even if the US Unemployment Claims have dropped from 234K to 229K in the previous week, the traders have expected to see an increase to 235K. 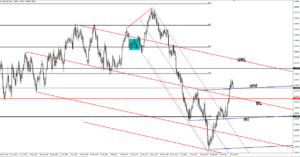 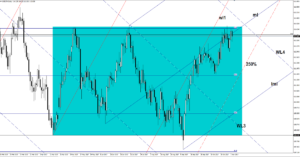 The pair dropped after the yesterday’s increase and could invalidate the breakout above the median line (ml) of the ascending pitchfork and above the long term 23.6% retracement level.  Price shown a minor exhaustion and has dropped as the Nikkei stock index slipped lower as well. We’ll see what will happen because the JP225 maintains a bullish perspective on the short term, has broken above a dynamic resistance and now has come down only to retest the broken level. 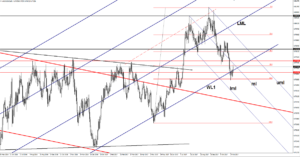 The rate increased significantly and has managed to jump much above the first warning line (WL1) of the major ascending pitchfork. Price is almost to reach the median line (ml) of the minor descending pitchfork. A valid breakout above the median line (ml) will signal a further increase on the short term. A further drop will be confirmed only by a drop below the WL1 followed by a retest of this line.