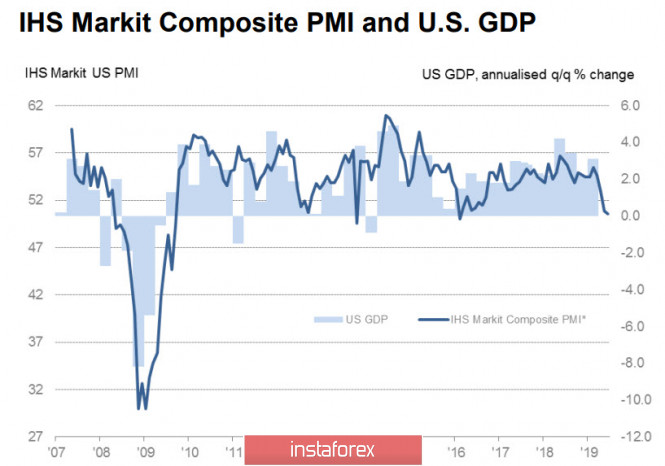 Markets are stable in anticipation of the G20, however, the rapid growth of gold is a prerequisite for the upcoming shocks. The US economy is losing momentum. Changes are becoming visible primarily at the regional level. While the model of GDP from the Federal Reserve Bank of Atlanta suggests a steady growth in GDP in Q2. At the level of 2%, reports on the business activity of the regional offices of the Fed become suspicious of the same type.

Thus, the business index of the New York Federal Reserve Bank in June fell from + 17.8n to immediately -8.6p, followed by Philadelphia’s announced fall from 16.6n to 0.2n. The Dallas FRB reported last, its decline from -5.3n to -12.1n. In all districts, statistics are at the level of 3-year lows, that is, worse than before the presidential elections. Accordingly, preliminary data from Markit for PMI in June is slightly above 50p. The decline in business activity becomes noticeable, but is still not noticed by markets that prefer to hope for the best.

The main reason is the decline in demand for consumer and capital goods as a result of rising tariffs, and NAB Bank assumes that prices will continue to decline both this year and next year, even without worsening trade tensions. Lower prices will lead to a slowdown in inflation and pressure on the services market, since there are no objective reasons for its growth.

In the previous review, we assumed that the Aussie would go to 0.6844 and further to 0.6801 / 11. The first of these goals was worked out, but then the Fed unfolded expectations for the dollar in the direction of a sharp decline, thanks to which AUDUSD rolled back up. Nevertheless, the trend remains bearish. The previous maximum of 0.7021 is not updated, and if the Trump-C meeting does not bring a breakthrough. The AUD will turn down with the intention to test the recent maximum of 0.6831.

Investors are in anticipation of meeting Trump and SI at the G20 summit, which, if not, will lead to a full-scale trade agreement between the US and China, then at least can significantly reduce tensions. Markets are still in a state of cautious optimism, which, has combined expectations for lowering the Fed rates, giving the Bulls a good chance of continued growth.

Today, RBNZ will hold a regular monetary policy meeting. Markets expect the regulator to take a pause in the rate reduction cycle, so if the RBNZ does not disappoint expectations, the kiwi may respond to the growth of the meeting and gain a foothold above the June maximum of 0.6680.

The ANZ Bank expects that the rate will still be brought to the level of 1% by two consecutive reductions in November and March. In addition, today’s commentary of the RBNZ is able to provide insight into whether the regulator will use any more soft monetary policy methods, such as quantitative easing, liquidity provision (similar to the European TLTRO program), and the purchase of foreign currency assets to reduce TWI. Answers to these questions will provide insight into the future direction of the NZD.

Earlier, we assumed that Kiwi would try to update support for 0.6480. This goal remains relevant, however, a downward reversal will occur only if the RBNZ gives for that reason tonight. There are no fundamental reasons for leaving the range, so the further dynamics will be fully determined by the outcome of the RBNZ meeting.

A detailed analysis of the latest ABS report on the labor market showed that serious systemic problems are accumulating in the Australian economy. In all sectors, the growth in employment for the year until May 2019 was the most significant in the field of public administration and professional services, while the greatest loss of jobs for the year was in construction and manufacturing. At the same time, casual work accounts for 20.9% of the total workforce, which generally indicates that the Australian economy is gradually losing its fundamental stability.

Metal prices fall after the deterioration of trade relations between the United States and China. 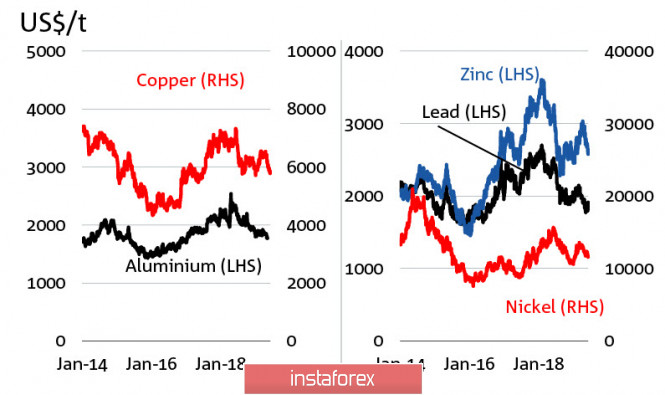 Source:: Waiting for G20: AUD and NZD are preparing to resume the fall