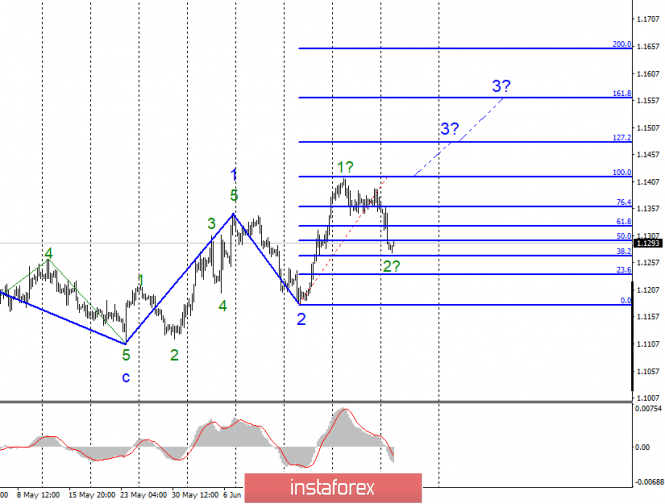 On Monday, July 1, trading ended for the pair EUR / USD by a decrease of 80 basis points. Such a decline so far fits into the current wave counting, which implies the construction of a downward wave 2 in the composition of wave 3. If this is true, then from the current position, the euro-dollar increase in the instrument can resume within wave 3, 3. But will this not hinder news background? The fact is that the restart of the negotiation process between the US and China again plays into the hands of America. Trade war in general has a paradoxical effect on the US dollar. If the conflict escalates, new duties are introduced, then America’s economy suffers less than the Chinese, and accordingly the dollar is in demand. If negotiations are resumed and there is hope for a bargain, then this is, in the first place, to the benefit of the States and Trump, since it is the President of the United States who wants to get more favorable and “fair” terms of trade relations. Thus, if weak statistics does not continue to come from America, the upward trend plot can be completed near the maximum of June 25.

The euro / dollar pair is presumably located within the 3 waves of the upward trend. I recommend buying the euro with targets located near the estimated marks of 1.1417 and 1.1480, which equates to 100.0% and 127.2% Fibonacci, when the MACD signal is up. Now the correctional wave 2 continues its construction. The GBP / USD currency pair continues to build a new upward trend, but yesterday it has lost about 60 basis points. Thus, the pound-dollar tool continues to build a corrective downward wave. However, an unsuccessful attempt to break through the maximum of wave d still raises doubts that the market is ready to buy pounds above 1.2770. At the same time, the absence of a breakthrough of the e wave minimum does not give grounds to assume that the market is ready to complicate the downward trend. Thus, between the levels of 1.2500 and 1.2770 a “zone of calm and uncertainty” has been formed for the pound. The MACD “upward” signal will give reasons to assume a transition to building wave 3, but the news background may prevent the UK currency from resuming growth. Today, for the important events, I only note for the speech of the Chairman of the Bank of England Mark Carney, and you need to have a huge optimism to expect supportive pound rhetoric. At best, it will be neutral for the pound sterling.

The wave pattern of the pound / dollar instrument has changed and is now suggesting the construction of a new upward trend. At the same time, I recommend waiting for a successful attempt to break through the maximum of wave d, which confirms the willingness of markets to further increase, and only after that, we make purchases. Up to this point, the pair may be within the horizontal portion of the trend.