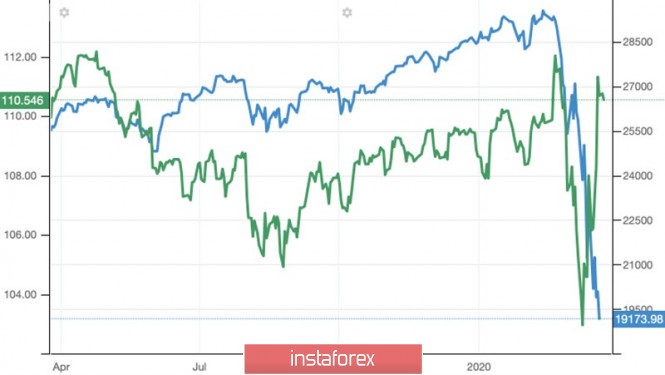 Easing monetary policy no longer leads to a fall in the exchange rates of national currencies, and the transition of the S&P 500 to the hands of “bears” – to a downward trend in USD/JPY. The Fed lowered the federal funds rate by 100 bps and revived QE by $700 billion, while the Bank of Japan responded by modestly increasing purchases of ETFs from £6 trillion to £12 trillion and kept the overnight rate at the same level. However, the yen weakened to a one-month low instead of growing against the US dollar. A paradox? Not at all! In times of economic crisis, everything is turned upside down.

By aggressively easing monetary policy, the Fed actually returned the dollar to the status of the main funding currency (before that, it was actively used by the euro and the yen due to the low negative rates of the debt markets of the eurozone and Japan), which, together with the soaring volatility in Forex and high demand for the US currency outside the US, contributed to a sharp increase in the USD index. In the steel market, rumors are actively spreading that investors are going into a cache, fearing for the fate of their assets. However, the unexpected divergence between USD/JPY and US stock indices suggests that this is not the only reason.

During the last 11 years of the existence of the “bull” market for American shares, residents of the Land of the Rising Sun have been active buyers of these securities. And no wonder, at home, due to low-interest rates, they could not earn money seriously. For pension funds, including the world’s largest GPIF, which has a $1.6 trillion portfolio, asset diversification was a necessity due to Japan’s aging population. As a result, stocks issued in the United States were bought, the growth of the S&P 500 led to a rally in USD/JPY due to the overflow of capital from the Land of the Rising Sun to the United States.

In 2020, due to the reversal of the trend in American stock indices, their paths with the yen diverged. Japanese investors do not return money to their homeland, but use cash to maintain their own positions in the US stock market. Some use the correction as an opportunity to buy fairly cheap securities. As a result, the S&P 500 continues to go down, and USD/JPY goes up. The process of weakening the yen may accelerate if the market can be stabilized thanks to a large-scale monetary stimulus from the Fed and fiscal assistance from the White House in the amount of about $2 trillion. The latest collapse in stock indices was due to the fact that the Senate did not approve the project of Donald Trump and his team. Nevertheless, the President does not lose hope. His new attempts to get the program through Congress are far more important than the events of the economic calendar, which allows the yen to claim the role of the most interesting G10 currency in the week to March 27.

Technically, the activation of the “Deception-Outlier” and “Wolf Wave” patterns is able to move the USD/JPY quotes at least to the levels of 112 (target on the “Wolf Wave” model) and 114 (the upper limit of the medium-term consolidation range of 105-114). Until the pair holds above 108-108.5, the situation is controlled by the “bulls”.

Source:: Yen is in no hurry to return home