Investors will also have their eyes on Chinese markets, which reopen on Monday after being closed for a week in observance of the Lunar New Year holiday. Having missed a rocky week in global markets, Chinese shares tumbled on the first trading of the Chinese new year of the monkey.

On the data front, China’s trade contracted significantly more than economists had expected in January, as the world’s second biggest economy continued to be impacted by weak global and domestic demand.

Japan was also in focus this morning as the preliminary reading on Q3 GDP was due. Japan’s economy contracted at an annualized rate of 1.4 percent in the fourth quarter of 2015, data showed earlier today. This was caused by a sharp drop in consumption. Expectations were for a 0.8 per cent contraction. It was the biggest drop since a 2.8 per cent contraction in the September of 2014, that saw the economy dip into recession again. GDP fell 0.4 per cent quarter-on-quarter, seasonally adjusted, in Q3 compared to the consensus for a 0.2% contraction after a 0.3% expansion in Q3.

Although shares were relatively unperturbed, the weak data helped push the yen weaker through morning trade. The Japanese currency was 0.6 per cent softer at 113.87 yen per dollar in morning trade, but had hit a 15-month high of 110.99 last week as investors flocked to haven investments amid a global market sell-off.

This morning, the dollar index, a measure of the US currency against a basket of global peers, was up 0.3 per cent at 96.185.

Elsewhere in commodities, brent crude, the international benchmark, was down 0.6 per cent at $33.17 a barrel, while West Texas Intermediate, the US marker, was 0.8 per cent lower at $29.22. The benchmarks were up by 11 per cent and 12.3 per cent, respectively, on Friday following reports late last week that OPEC may discuss a production cut to help stem the global crude glut.

EURUSD has extended its correction below the daily pivot. 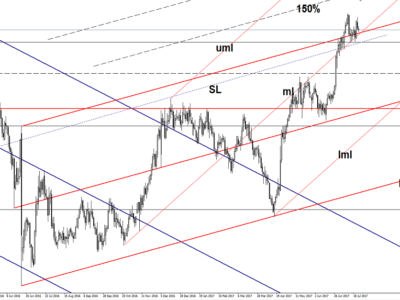