Intraday technical levels and trading recommendations for EUR/USD for February 14, 2017 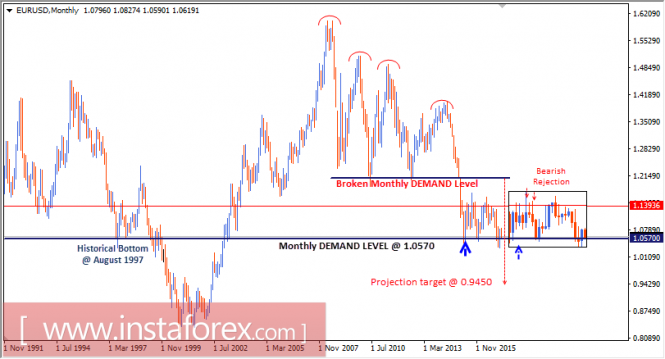 In January 2015, the EUR/USD pair moved below the major demand levels near 1.2100 where historical bottoms were previously set in July 2012 and June 2010.

Hence, a long-term bearish target was projected toward 0.9450.

In March 2015, EUR/USD bears challenged the monthly demand level around 1.0570, which had been previously reached in August 1997.

Later in April 2015, a strong bullish recovery was observed around the mentioned demand level.

However, next monthly candlesticks (September, October, and November) reflected a strong bearish rejection around the area of 1.1400-1.1500.

In the long term, the level of 0.9450 remains a projected target if the current monthly candlestick achieves bearish closure below the depicted monthly demand level of 1.0570. 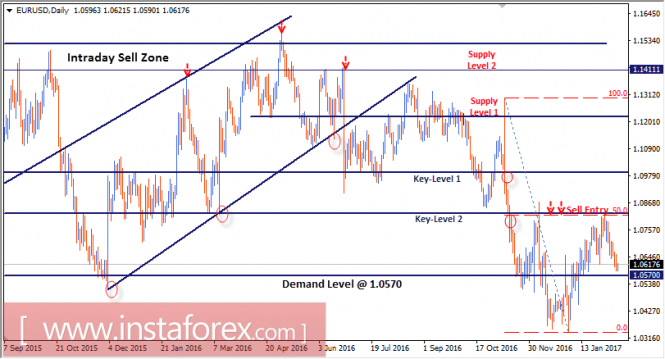 The long-term outlook for the EUR/USD pair remains bearish as the monthly chart illustrates. Bearish persistence below 1.0575 is needed to pursue this bearish scenario.

On November 14, bearish persistence below 1.0825 (Key-Level 2) allowed further decline toward 1.0570 (demand level) where evident bullish rejection was expressed on November 24.

Shortly after, the Fibonacci Level 50% (1.0825) constituted a recent supply level which offered a valid SELL entry on December 8.

Bearish persistence below the depicted demand level (1.0570) was expected to allow further decline toward 1.0220. However, significant bullish recovery was expressed around the price level of 1.0340 on January 3.

Bullish persistence above 1.0600 allowed further bullish advance toward 1.0825-1.0850 (Fibonacci Level 50%) where bearish rejection and a valid SELL entry were anticipated.

That is why, the price level of 1.0570 at the moment constitutes a recent demand level to be watched for corrective bullish rejection.

Trump on Twitter- is it dangerous for the markets?