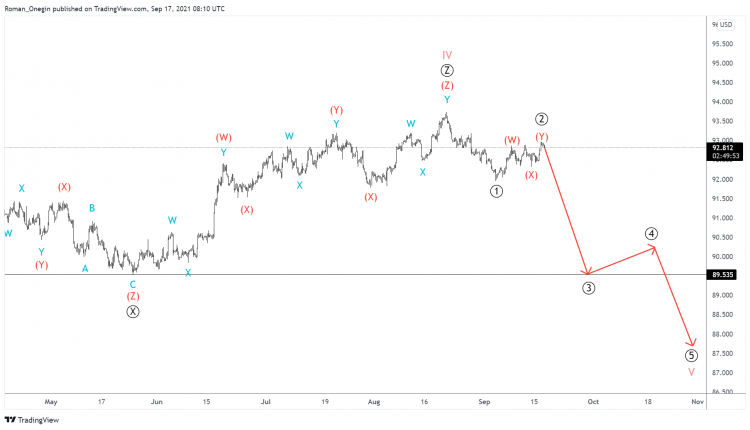 In the long term, DXY seems to be forming a bearish impulse that consists of five cycle sub-waves.

The chart shows the final part of the deep correction wave IV, which, apparently, has come to an end. It took the form of a primary triple zigzag Ⓦ-Ⓧ-Ⓨ-Ⓧ-Ⓩ.

We are currently in the initial part of the cycle wave V, which could be a 5-wave ①-②-③-④-⑤ impulse.

In the near future, primary wave ③ will lead the market towards the 89.53 area, or even lower.

The alternative scenario suggests the continuation of the development of the cycle correction wave IV. Perhaps wave IV is a large double zigzag of the primary degree Ⓦ-Ⓧ-Ⓨ.

The primary wave Ⓨ, which is similar to the triple zigzag (W)-(X)-(Y)-(X)-(Z), is currently under development. The first four parts of this figure have ended, with the final sub-wave (Z) under construction.