Weak statistics on the German economy and the mention of Mario Draghi of the word “recession” led the single European currency into the red zone for the week by January 18. And let the head of the ECB argued that the recession is not a question, we need to talk about a smooth landing, the financial markets are rather shy. If German GDP shows the worst dynamics since 2013, and its European counterpart, judging by business activity, closes the fourth quarter worse than the modest third (+ 0.2% q / q), then why buy EUR / USD? Wouldn’t it be better to continue to keep the US dollar in investment portfolios?

Theoretically, the slowdown in the US economy, the pause in the process of normalizing monetary policy and the growing recession risks should weaken the position of the bears on the main currency pair. However, while macroeconomic statistics do not confirm the idea of a significant loss in the rate of US GDP, and the yield curve has not inverted, it is too early to panic. Yes, the indicator predicted the last 7 recessions of 7, yes, the macro statistics are retrospective, and the indications of financial markets are of a predictive nature, but until the thunder breaks out, the peasant will not cross himself.

Dynamics of the US yield curve

Fed officials are beginning to pay increased attention to the dynamics of stock indices. In their opinion, the high turbulence of the stock market, the growing risks of a slowdown in the global economy and global demand, as well as tight financial conditions and a strong dollar are strong arguments in favor of slowing monetary restriction. However, looking at the peak of the USD index at the end of 2018, it can be concluded that the factor of the “pigeon” rhetoric of the FOMC plenipotentiaries is already partially taken into account in the EUR / USD quotes.

A single European currency would be nice to get up on its feet, and a week by January 25 may be decisive in its fate. In its course, the results of the ECB meeting and figures on business activity for January will be known. The strong start of purchasing managers’ indices in 2019, coupled with the preservation of the Governing Council’s optimism about the recovery of GDP and inflation of the currency bloc, can inspire EUR / USD “bulls” to attack. On the contrary, the inability of PMI to implement moderately positive forecasts of Bloomberg experts and hints of Mario Draghi on the expansion of the stimulus package, if necessary, will return the initiative to the bears.

The course of negotiations between the US and China can also contribute to its dynamics. If the idea of Steven Mnuchin to lift import duties in order to calm the financial markets comes to life, then we are expected to sell safe-haven assets, including the US dollar. On the contrary, the escalation of the conflict will hurt the euro.

Technically, the bulls in EUR / USD do not leave hopes for the implementation of the Bat pattern with a target of 88.6%. To do this, they need to bring the quotes of the pair outside the consolidation range of 1.1265-1.1485 and rewrite the January maximum. On the contrary, the inability of euro buyers to keep quotes above $ 1.14 will increase the risks of continuing the pair’s southern hike. 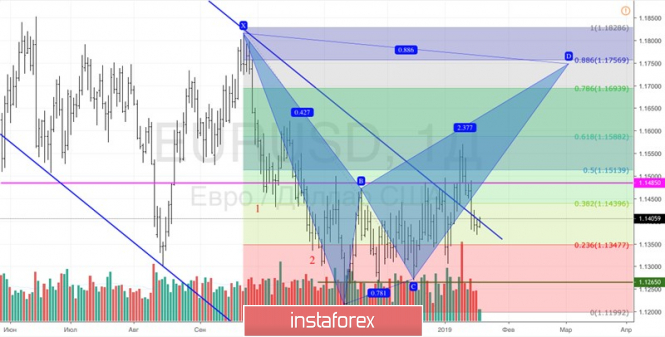 Media: the US may waive duties on Chinese goods