Weakness of the dollar will not last long 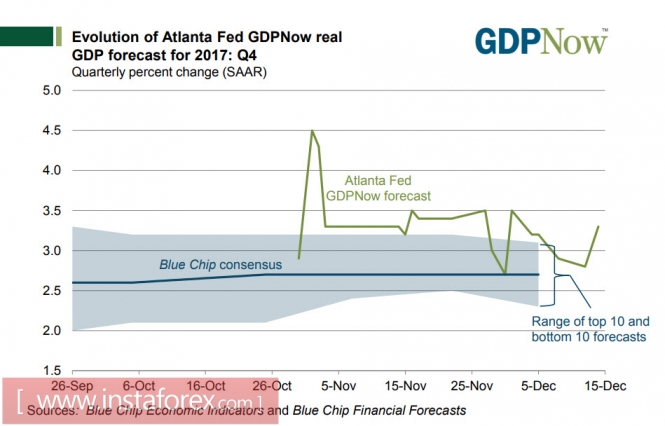 Retail sales in November rose above expectations, allowing the dollar to complete a short-term correction, which it left immediately after the FOMC meeting in 2017. The growth was 0.8% with a forecast of 0.3%. Preliminary data from Markit was more upbeat than expected, the industrial sector’s growth, the index PMI in December stood at 55.0p from 53.9p a month earlier. This result somewhat does not correspond to the composite PMI index, since the same indicator for the service sector decreased to 52.4p, which is a low for 12 months.

The economic picture as a whole for the dollar remains favorable. The indicator of optimism of small business NFIB has risen to record highs, growth is connected with positive expectations of the consequences of tax reform. Combined with strong consumer confidence, this indicates a fairly strong positive momentum, expansion should continue in the coming years, which will ultimately contribute to both consumption growth and investment growth.

The forecast for GDP for the 4th quarter of the Atlanta Fed looks positive, with a growth of 3.3% – even slightly higher than expected.

The reasons for the economic nature, which can justify the fall of the dollar index, are very few. The main one is that inflation is not strong enough. At a press conference on Wednesday, Janet Yellen reiterated that low inflation is temporary, but there are risks that it will remain below the 2% target level for quite some time. This probability is the main reason for the dollar to lose momentum for growth. Since in this case, the Fed will not have any reasons to raise the interest rate three times in 2018, that is, the Fed will not be able to fulfill its own schedule.

There is no consensus among the members of the Cabinet. On Wednesday, Kashkari and Evans voted against the rate hike, but they lose the right to vote next year, so the Cabinet as a whole will become a bit more hawkish. Realizing that weak inflation data could be the reason for the market’s strong disappointment, the FOMC (as it could) compensated for the potential effect of improving unemployment forecasts and GDP growth rates. These two factors, in combination with each other, are bound to lead to higher inflation. In any case, the markets regard this signal as FOMC, and therefore the correction of the dollar turned out to be so short.

What next? There will be a reassessment of risks. The Fed managed to get the main result – against the background of weak inflation, the growth rate forecast did not change. According to the data of the CME futures market, it already holds above 55% for the March meeting, that is, the markets share the optimism of the Fed in terms of inflation growth in the coming months.

At the moment, the dollar has no significant reasons for weakening. In any case, the causes would be internal. This could be facilitated by a more confident position of other central banks on the exit from a soft monetary policy. However, the ECB and the Bank of England also held their meetings in a dovish manner, without giving the market a chance to increase volatility.

The economic calendar for the dollar is calm. On Monday, Tuesday and Wednesday, there will be data on the housing market, forecasts are moderately positive, and they will not have a strong impact on the dollar quotes. On Thursday, the final data on GDP in the third quarter will be published, and the most important event will take place on Friday, when data on personal consumption in November and the volume of orders for durable goods will be released. Markets are waiting for the growth of the PCE index from 1.6% to 1.7%. The confirmation of the forecast will serve as a strong driver for the resumption of the growth of the dollar.

Contrary to expectations, the euro does not have many chances to resume growth, we expect the EUR/USD pair to decline towards a support of 1.1650 in the short term. Perhaps some strengthening of the AUD and NZD, which are more focused on China, reported on the growth of industrial production and investment, but the effect of this factor is unlikely to be long.

Source:: Weakness of the dollar will not last long