Chart patterns in the financial markets often evoke mixed responses. This is partly due to the fact that despite the clear definitions of the various chart patterns, real time trading with chart patterns such as head and shoulders, double/triple tops and bottoms, wedges and triangles, etc are a bit subjective. One trader’s ascending triangle might be seen as a double top by another trader.

Besides the subjectivity that comes with chart patterns, most often than not, traders have to deal with the fact that “a chart pattern is valid only when price hits the measured move or the projected target“. Ask any trader and you will come across instances where a head and shoulders pattern for example failed.

So how does one get over this handicap and is there a better way to trade the price action based chart patterns?

The answer lies in Renko charts. Simply put, Renko charts are nothing but price based bricks and do not take into consideration the time factor (unlike the line/bar/candlestick charts, which consider price and time). By focusing purely on price action, Renko charts have a distinctive advantage over the rest or other conventional forms of charting techniques. For traders who want to learn more about the basics of Renko chart, can read more here as the collection of articles offers readers a basic groundwork and provides insights into concept of Renko charts.

Let’s take a look at a very simple example illustrated in the following chart: 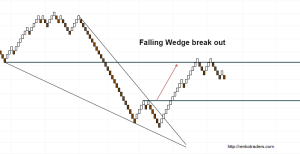 In the illustrated chart, we have a regular Renko chart. Notice how simple it is to identify the falling wedge pattern? If you notice carefully, the entry and exits for this falling wedge chart pattern is also easy to spot as well.

What makes trading chart patterns simpler with Renko charts is the fact how price action is depicted, and more importantly the trends in the price action itself. With a traditional chart such as candlesticks, traders will have to battle some emotions and doubts as well whether they identified the chart pattern correctly or not. 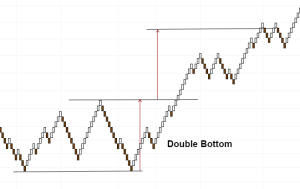 Another example is the often confused double bottom chart pattern, which is again a good indicator of a bullish reversal to the downtrend. In this second chart, we can clearly see how price stalled at the lows, forming a double bottom pattern and after breaking the previous resistance to the double bottom, price rallied strong enough to reach the measured/projected price target.

Once again, the simplicity and the rather clear objectivity that comes with using Renko charts is highlighted here. Clearly, there isn’t much of subjectivity involved in the above two examples and is probably something that can be easily spotted by traders.

Renko Charts – Why should you use them?

Traders can look to using the Renko charts for a variety of reasons. Here are some of them. 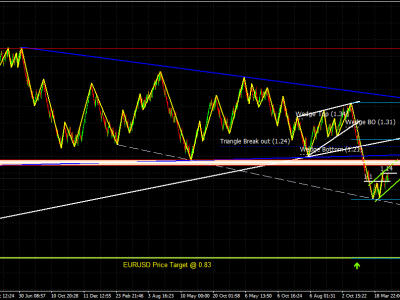