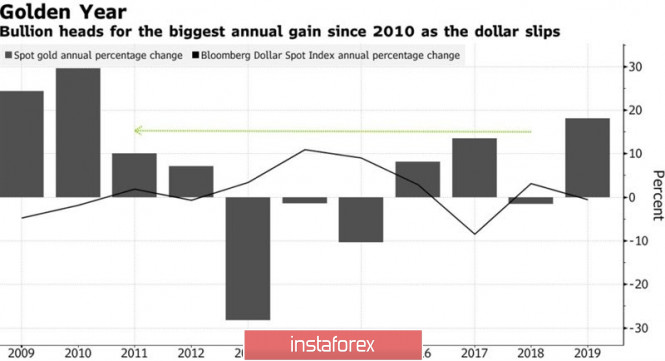 The weakness of the US dollar at the end of the year made it possible for gold to eliminate most of the autumn losses associated with the de-escalation of the US-China trade conflict and head for better performance since 2010. The precious metal grew by 16.5% at the end of 2019 due to trade wars, the monetary easing cycle, Fed policies, weaknesses in major world currencies and declining global debt market returns. It is quite capable of starting 2020 on a major note, because the signing of a trade agreement by Donald Trump and Xi Jinping risks launching the S&P 500 correction process against the background of the principle of “buy by rumor, sell by facts”.

While the bulls on XAU/USD are enjoying the victory, their opponents talk about the limited potential of the rally and the technical nature of gold growth at the end of December. There are no grounds for buying safe haven assets amid record peaks in US stock indices and a high global risk appetite. Trading volumes are low, probably, one of the speculators is testing the market for strength. No more. CME derivatives give only a 45% chance of the Fed loosening monetary policy in 2020, so the precious metal seems to have nowhere to draw strength.

In fact, you need to understand that uncertainty will not disappear even after the conclusion of the phase one deal. Most of the tariffs against China remain in force, so there is no reason to count on a V-shaped recovery of its economy. The process will go with a creak, which will keep the demand for reliable assets high. According to a survey of 37 largest asset managers conducted by Reuters, the share of debt securities in their portfolios increased from 41.8% to 42.1% compared to November, while equity, on the contrary, decreased from 47.5% to 47%. There is no talk of any rush demand for risk.

Uncertainty contributes to capital inflows into precious metals-oriented ETFs. At the end of 2019, stocks of specialized exchange-traded funds increased by $18 billion, which is the best result in three years and contrasts with the results of other ETFs focused on the commodity market. In particular, energy exchange funds lost $1.2 billion, those working with industrial metals – $ 200 million, with agricultural products – $260 million, with commodity market indices – $1.5 billion. 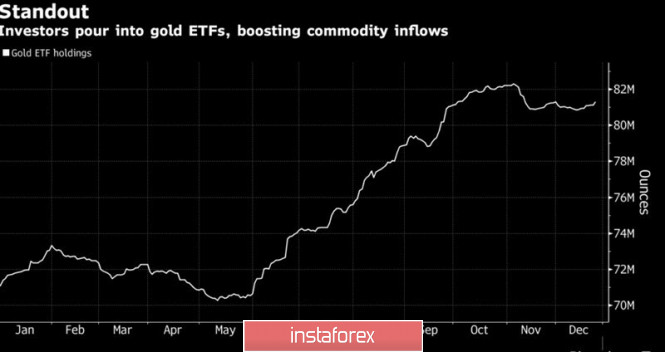 If we add to the fact that the trade war between Washington and Beijing is not over yet, the growth of political risks in the United States in connection with the presidential election and the tension between the US and the EU, which at any moment can develop into a large-scale trade conflict, the desire of investors to hide in the golden cave looks logical. It is unlikely that a sell-off in XAU/USD should be expected; I estimate the chances of the restoration of the bullish trend higher than the development of the correction.

Technically, activating the Expanding Wedge pattern increases the risks of target implementation by 161.8% according to the Crab model. Drops to 23.6%, 38.2% and 50% to wave 4-5 should be used to form long positions.

EUR/USD and GBP/USD: the euro and the pound are preparing for growth in 2020