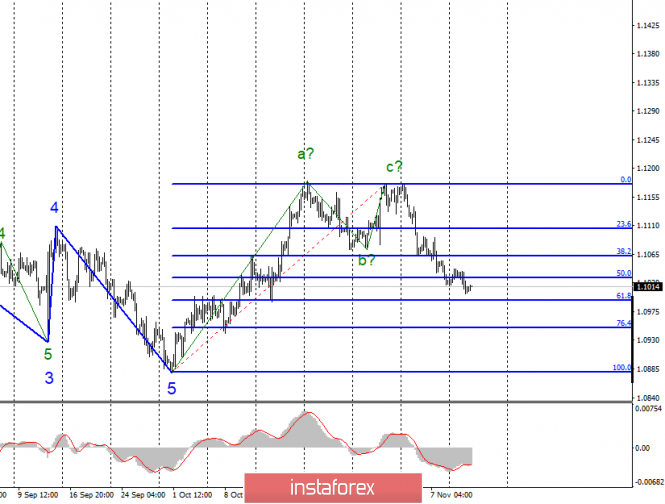 November 12 ended for the pair EUR / USD with a decrease of 25 basis points. Thus, the construction of the proposed first wave as part of a new bearish section of the trend continues with targets located near the levels of 61.8% and 76.4% Fibonacci. An unsuccessful attempt to break through any of these levels may lead to quotes moving away from the lows reached. In general, wave marking involves reducing the instrument to at least to the 9th figure, and possibly lower.

On Tuesday, the news background for the euro-dollar instrument was absent again. Well, the market remained quite low activity, but still the advantage was on the side of the American currency. The pair’s decline is slow, however, it is there, while there are few news and reports for the instrument. Moreover, the news background will be stronger today, November 13. In Germany, an inflation report for October will be released today, in the Eurozone, a report on industrial production for September, and in America, an inflation report for October. European reports have very low forecast values and are likely to disappoint the markets. However, inflation in America may be below the expected + 1.7% y / y. In the context of the current wave marking, the retreat of quotes up after a rebound from any Fibo level would be logical. Therefore, I expect that in the afternoon, either the inflation report in America or Jerome Powell’s speech to Congress will disappoint the markets a little, which will lead to a pullback to the top.

The euro-dollar pair allegedly completed the construction of the upward trend correction section. Thus, I recommend to remain in the sales of the instrument with targets located near the calculated levels of 1.0993 and 1.0951, which equates to 61.8% and 76.4 Fibonacci, until an unsuccessful attempt to break through any of these levels. 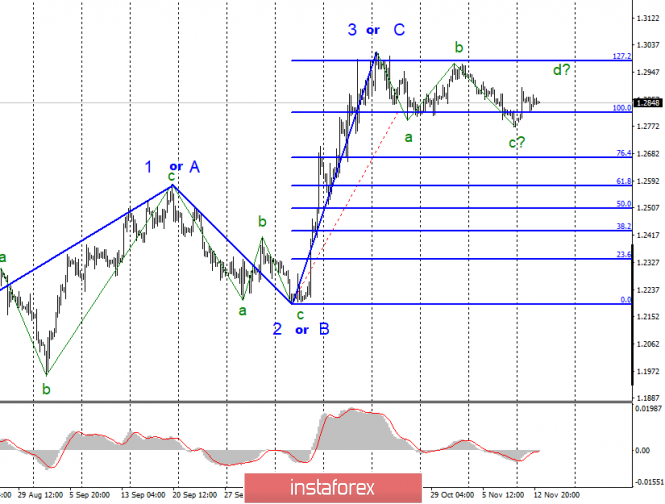 On November 12, the pair GBP / USD lost about 10 basis points, and the current wave pattern begins to take the form of a horizontal section of the trend, which will consist of five waves. If this assumption is correct, then the increase in quotations can continue with targets located around 1.2950 within the framework of the proposed wave d , after which, according to the current wave pattern, the decline will resume within the framework of wave e with targets below the 100.0% Fibonacci level.

The pound is still resisting the news background, which should have sent it to the 27th figure, or even lower. Let me remind you that the reports on GDP and industrial production in the UK last Monday turned out to be very weak, and yesterday, on Tuesday, the reports on wages and applications for unemployment benefits were no less weak. The only positive news is the unemployment rate, which fell to 3.8%. However, along with it, the growth rate of wages decreased and the growth rate of the number of applications for unemployment benefits increased. Today, another extremely important economic report in the UK is coming out – the inflation report. Judging by forecasts, the consumer price index will not tolerate changes in October. However, previous reports from Britain make us think about the real value may be lower than the forecast. After lunch, inflation in the United States will come out with the same forecast, + 1.7% y / y. Most likely, if the pound-dollar instrument shows active movements today, it will happen in the afternoon, where more important events are concentrated. Although, it seems that the markets are not interested now in economic data from the UK.

The pound / dollar instrument supposedly completed the construction of the upward trend section. Thus, only a successful attempt to break through the level of 1.2986 can be regarded as a complication of this area, its transformation into 5-wave and become the basis for new purchases of the instrument. At the same time, the trend section threatens to go into horizontal form after October 21, which does not call the further lowering of the instrument into question.

Source:: Analysis of EUR / USD and GBP / USD for November 13. The focus of the market: German, British and American inflation.