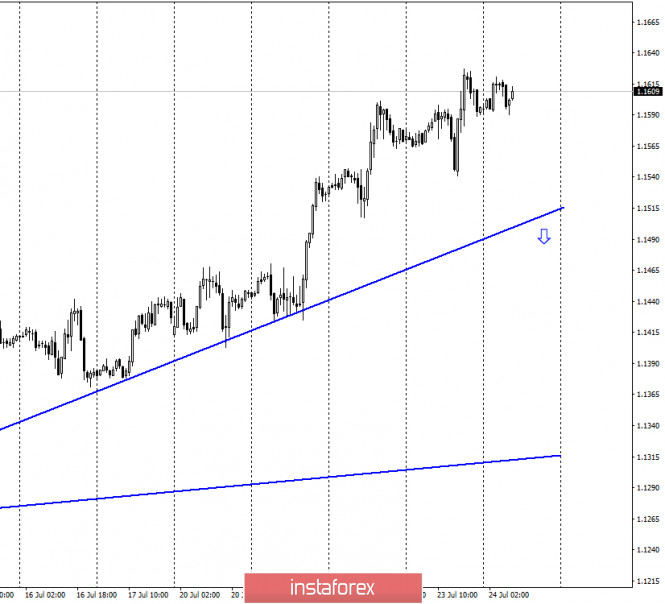 Hello, traders! On July 23, the EUR/USD pair continued its growth process after another rebound from the upward trend line. We still have two upward trend lines at our disposal, each of which characterizes the current mood of traders as “bullish”. The information background in the eurozone at this time is quite interesting. No sooner had the EU summit ended, which eventually lasted 2 days longer than planned, when the European Parliament announced that it did not support the draft budget for the next 7 years adopted at the summit. First, the Parliament believes that the budget is too small (1.074 trillion euros). Second, it opposes cutting funding for certain programs. Third, it believes that the allocation of funds from the reconstruction fund should be tied to the “rule of law” (in simple words, loyalty to the European Union). Since several countries (Italy, Hungary and Poland) do not fully comply with the principle of “rule of law” at the moment, the European Parliament accuses individual politicians of political agreements and blackmail. However, as we can all see, this news did not affect the European currency in any way. The bulls believe that the budget will be approved almost in any case. In addition, the complex epidemiological situation in America does not even allow us to consider buying American currency. 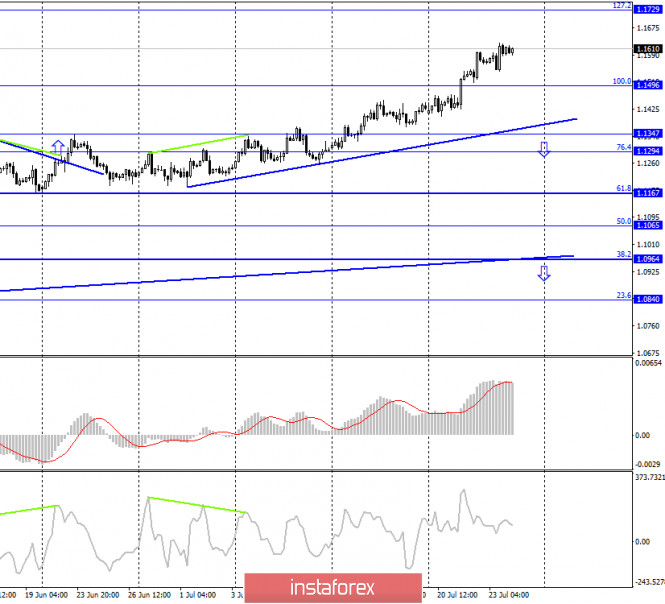 On the 4-hour chart, the quotes of the EUR/USD pair continue to grow in the direction of the corrective level of 127.2% (1.1729). Thus, the “bullish” mood of traders remains, which, in addition to the two upward trend lines on the hourly chart, is also indicated by the trend line on the current chart. The rebound of quotes from the Fibo level of 127.2% will allow traders to expect a reversal in favor of the US dollar and a slight fall in the direction of the corrective level of 100.0% (1.1496). 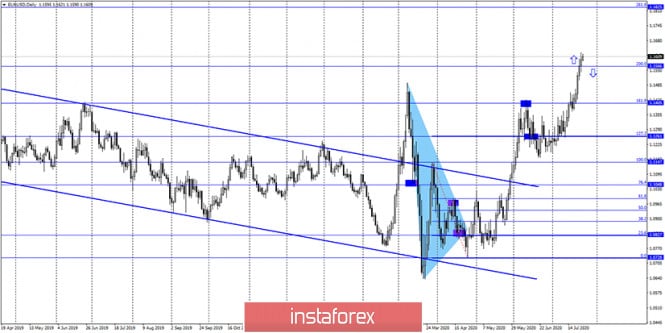 On the daily chart, the EUR/USD pair made a consolidation above the Fibo level of 200.0% (1.1566). Thus, the probability of continuing the growth of quotes in the direction of the corrective level of 261.8% (1.1825) has significantly increased. 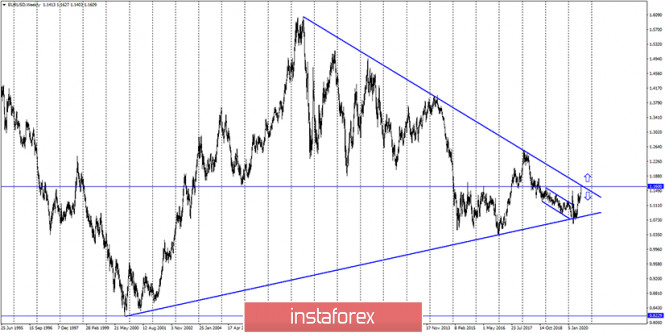 On the weekly chart, the EUR/USD pair, after rebounding from the lower line of the “narrowing triangle”, performed an increase to the level of 1.1600, which I gave as a target a few months ago. Thus, the upper line of the “narrowing triangle” has been worked out, which now allows us to count on the rebound from it and the resumption of the fall. If the triangle is not closed.

On July 23, the European Union did not have a single economic report. The number of initial applications for unemployment benefits in the United States increased again, by 1,416,000, but the total number of repeated applications for benefits fell to 16,197,000.

Germany – index of business activity in the manufacturing sector (07:30 GMT).

Germany – index of business activity in the service sector (07:30 GMT).

EU – index of business activity in the manufacturing sector (08:00 GMT).

US – index of business activity in the manufacturing sector (13:45 GMT).

On July 24, the US, Germany and the European Union will release business activity indices in the services and manufacturing sectors. However, I believe that traders will not pay much attention to them. Now there are more important topics. 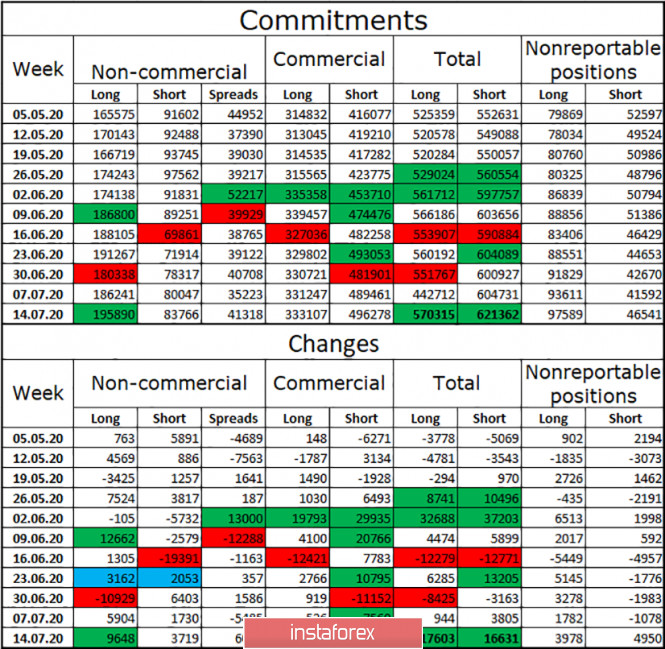 The latest COT report showed a sharp increase in the number of long-term contracts in the hands of the “Non-commercial” group. This means that the most important major market players during the reporting week (July 8-14) looked only in the direction of purchases. Several thousand short contracts were also opened, but much less than long. Thus, it is not surprising that the euro currency grew all the previous week and continues to do so on the current one. The COT report tells us now about a persistent bullish trend, as for the second week in a row, speculators are actively increasing long-contracts. The results of the EU summit could make the “bullish” mood of speculators even stronger. The end of the current week shows that the mood of bull traders is only improving.

Today, I recommend continuing to stay in the pair’s purchases with a target of 1.1729. If the pair closes at 1.1496, then purchases can be closed until new signals are formed. I recommend selling the pair if the quotes close below the trend line on the hourly chart with the goal of 1.1347.

Source:: EUR/USD. July 24. COT report. The unfounded threats from the European Parliament do not scare bull traders. The pair continues