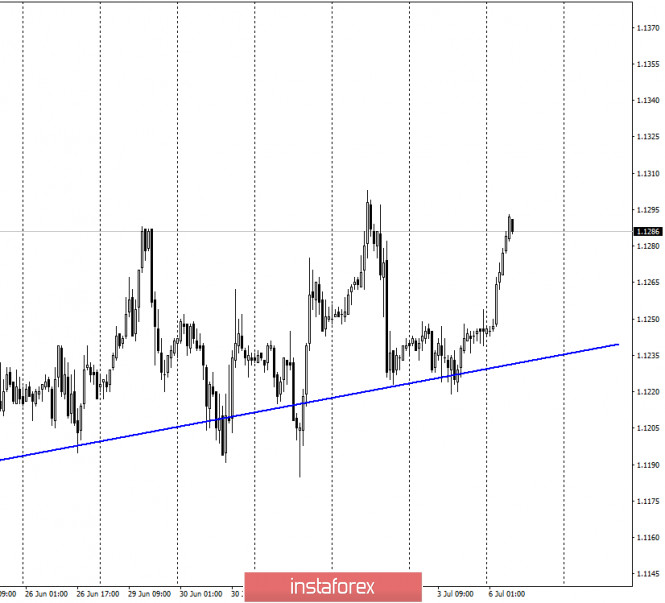 Hello, traders! The euro/dollar pair was trading near the upward trend line on July 3, maintaining a very uncertain “bullish” mood of traders. However, July 3 was a pre-holiday and weekend in the United States (July 4 is Independence Day). Thus, many traders on this day absolutely did not want to conduct active trading. In America, the information background was absent on this day, and even all important economic reports were moved a day earlier. However, the mood of most Americans on July 3-4 was completely non-holiday. America continues to lead the world in the number of cases of coronavirus, and in recent weeks, the rate of growth of the epidemic has begun to grow. The White House is inactive and does not even comment much on the new outbreak of the pandemic. Donald Trump has only repeated a few times what everyone has long known: “The increase in coronavirus cases is associated with an increase in the number of tests performed.” Meanwhile, the American economy may start experiencing problems again. If the epidemic is free to roam the country, then there is a possibility of new quarantines (even in some states), and a new decline in the economy is growing.

On the daily chart, the euro/dollar pair spent several trading days below the level of 127.2% (1.1261), however, today it can perform a consolidation above it, which will allow us to expect continued growth in the direction of the next corrective level of 161.8% (1.1405).

On the weekly chart, the euro/dollar pair rebounded from the lower line of the “narrowing triangle”, which still allows traders to expect growth in the direction of the 1.1600 level (the upper line of the “triangle”).

On July 3, the European Union released the index of business activity in the service sector, which did not particularly interest traders. All the most interesting news came out earlier last week, especially regarding American statistics. However, as we can see, it did not affect the US dollar in any way. It did not start a new decline, and did not continue the process of growth.

US – ISM composite index for the non-manufacturing sector (14:00 GMT).

On July 6, the EU will release a report on retail trade and its changes for May, but more significant data will be after lunch in the US – the ISM index for the service sector. The day started with a fall for the dollar, so traders are already negative. 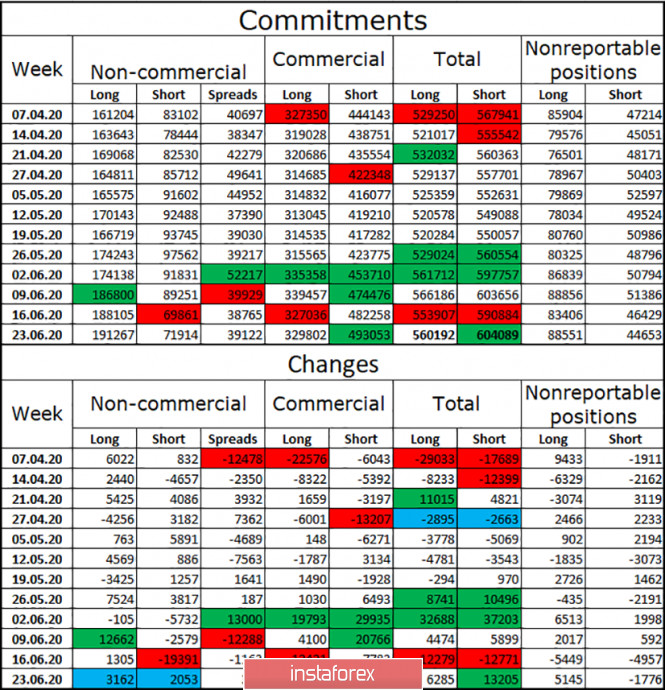 The latest COT report, released the Friday before last, showed almost nothing. The “Non-commercial” group, which is the most important group and is considered to be the one that drives the market, has opened a total of only 5,000 contracts, of which 3,000 are long and 2,000 are short. The “Commercial” group (hedgers) were more active and opened almost 11,000 short-contracts, however, as we can see, in the period from June 17 to 23, the euro/dollar pair was trading first down, then up, then down again. In other words, it is impossible to conclude that the mood of traders during this period of time was the same and did not change. Until the end of the previous week, traders continued to conduct slurred trading, and at the end of the week, the new COT report did not come out due to US Independence Day.