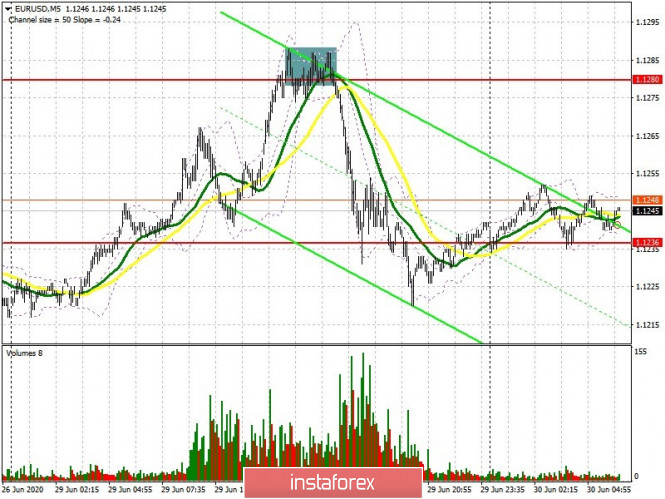 Yesterday’s attempt to break through resistance 1.1280 did not succeed, and good data on inflation in Germany was not enough to maintain the morning bullish momentum, which quickly waned amid the risk of a second wave of the coronavirus pandemic. If you look at the 5-minute chart, you will see how buyers of the European currency tried to cling to the level of 1.1280 several times, but returning to this range in the afternoon generated a signal to sell the euro, which quickly returned the pair to morning support at 1.1236, a little above which trade is now underway. There are some changes that could affect the growth prospects of the European currency in the Commitment of Traders (COT) reports for June 23. An increase in long positions was recorded a week earlier, but the growth of short ones was also noted, which indicates a possible slowdown of the bullish momentum in the short term. Those wishing to buy euros under current conditions and at higher prices are becoming much smaller, and more and more they want to have time to enter the market before the wave of a new fall in EUR/USD. The report shows an increase in short non-commercial positions from 69,988 to 72,368, while long non-commercial positions also slightly rose from 187,120 to 190,816. As a result, the positive non-commercial net position grew again and amounted toreached 118,448, against 117,132, which indicates a slight slowdown in the interest in buying risky assets at current prices. As for the intraday strategy, after yesterday’s unsuccessful attempts to raise the euro, it has not changed much. The bulls’ task is to protect the level of 1.1236 and forming a false breakout on it will be a signal to open long positions while expecting EUR/USD to grow to a high of 1.1282, where I recommend taking profit. The level of 1.1321 is another target at the middle of the week. If there is no activity at 1.1236 in the morning, and there are a number of reports on inflation in the EU countries and the eurozone as a whole today, it could put pressure on the euro. It is best to postpone long positions until we update the low of 1.1197 and buy from there immediately for a rebound with the aim of a correction of 20-25 points within the day.

The task is still the same for sellers of the European currency. It is necessary to wait until the inflation reports are released, which will most likely lead to consolidation below support 1.1236 and another wave of pressure on the European currency. This will open a direct path to a low of 1.1198, the next test of which will be a bearish signal and strengthen the downward trend with the exit to the levels 1.1170 and 1.1106, where I recommend taking profit. If the bulls continue to push EUR/USD after the publication, it is best not to rush into sales, but wait until the resistance of 1.1282 is updated, or open short positions immediately on the rebound from the high of 1.1321, counting on a correction of 20-25 points within the day. 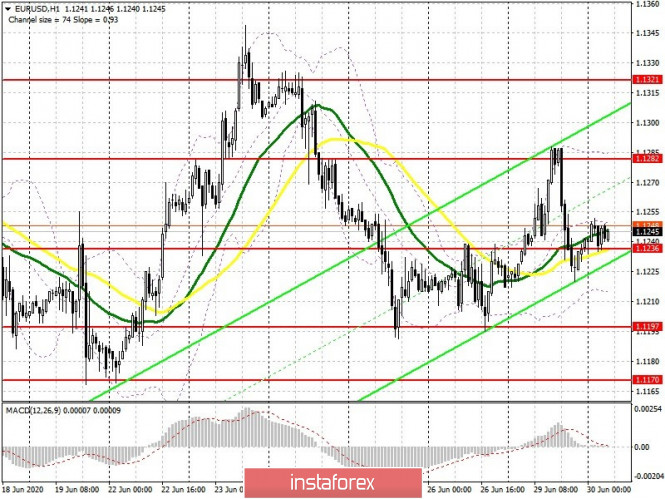 Trade is conducted in the region of 30 and 50 moving average, which indicates an active confrontation for the further direction of the market.

Source:: EUR/USD: plan for the European session on June 30. COT reports (analysis of yesterday’s deals). Inflation alone was not enough.