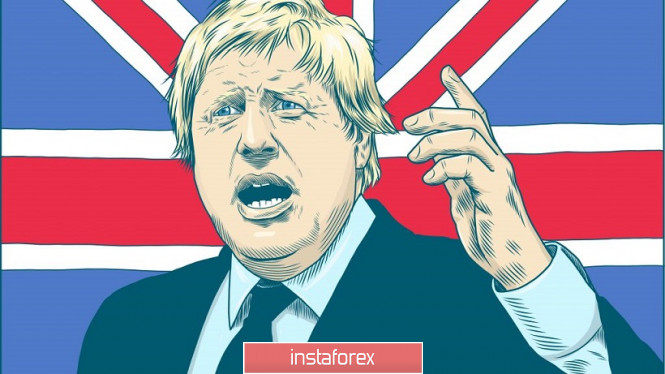 The pound against the dollar gradually returns to the boundaries of the 25th figure amid a pessimistic fundamental picture and the recovery of the American currency. However, the revaluation of the greenback is of optional importance in this case, considering the gloomy prospects of the “divorce process” of Britain and the European Union.

Only three weeks left before the final stage of the election of the new head of the Conservative Party (and, consequently, the next prime minister of the country). Apparently, Boris Johnson will keep his high rating up to this point. The family scandal, which recently knocked him down from his position, could not drastically change the situation, especially after more detailed comments on the incident. In other words, the financial world is preparing for the election of Boris Johnson to the post of the prime minister of Britain, while Johnson himself calls for preparing for a “tough” Brexit.

At the moment, the chaotic exit of Britain from the Alliance looks like an inevitable event. Brussels categorically refuses to revise the terms of the agreement reached last year. Neither the members of the current composition of the British Parliament nor the most likely candidates for the premiership support the deal in its current form. This situation developed at the end of last year, when May first tried to carry out a draft agreement through the millstones of the House of Commons. But under Theresa May’s premiership, there always existed a “Plan B”, which is the postponement of Brexit. Now, there is no such option. At least, Johnson does not get tired of repeating that he will lead the country out of the Alliance on October 31 in any case -with or without a deal. Moreover, he declared the other day that “the conservatives will not be forgiven” on the next prolongation of the negotiation process. In his opinion, the very existence of the ruling conservative party in the UK will be under threat in the current situation.

As we can see, the question of Brexit realization is already being considered from the point of view of the political viability of the conservatives. This position is quite justified if we consider the situation from the point of view of those British who supported Brexit in 2016: a three-year negotiating epic demonstrates Tories’ inability to implement its own idea. Since the majority of those who voted for Brexit are supporters of the Conservative Party, it is not difficult to predict the political consequences of the next postponement. The Tory rating is already dropping at an active pace as they lost 8% in just two weeks of June. According to the results of the last poll conducted by YouGov, the Conservative Party of Great Britain would receive only 19% of the vote in the next elections, taking third place. This is an anti-record: the last time such weak results from tories were 19 years ago.

This opinion poll showed that the leaders of the British political sympathies are those parties that occupy unambiguous positions regarding Brexit’s prospects – either for or against. For example, if elections were held this weekend, the largest political party in the House of Commons would be the Liberal Democrats, who consistently demand a new Brexit referendum. Liberals would get 24% of the vote but their antithesis, “Brexit Party” Nigel Faraj would have gained 22% of the vote. As the name of the party suggests, this political force stands for a complete and final break with the European Union.

In other words, the polarization of opinions is growing in the midst of British politics and of course, politicians will follow these trends. In this context, the next postponement of Brexit looks like political suicide for Johnson in particular and for the conservatives in general. Although there are quite a few centrists among the Tories who support further negotiations with Brussels, the country’s future prime minister is among the “hawks” who probably will not continue the policy of Theresa May.

By the way, Johnson’s main rival, Jeremy Hunt, returned to a tough approach regarding Brexit’s prospects after a short period of softening his rhetoric. In a recent interview, he said that if he was elected, he would try to change the agreement on withdrawal by the end of September. Otherwise, he would withdraw the country from the European Union without a deal. In addition, he promised not to pay “compensation” in this case to Brussels at least not more than half of the previously agreed amount. It is obvious that with such statements Hunt wants to win over the conservatives, who will choose between him and Johnson. Apparently, a moderate position did not bring the expected effect, after which hunt in his rhetoric began to largely echo the favorite of the political race.

Thus, today the probability of a “hard” Brexit is quite high and this fact puts background pressure on the British currency. Until London and Brussels agree on an algorithm for further actions (even if Britain leaves the market without a deal), GBP/USD traders should consider any more or less large-scale growth of the pair as an excuse for opening short positions. Brexit is the number one priority for the pound. In the light of recent statements by the main contenders for the premiership, the prospects for the “divorce process” remain unequivocally negative.