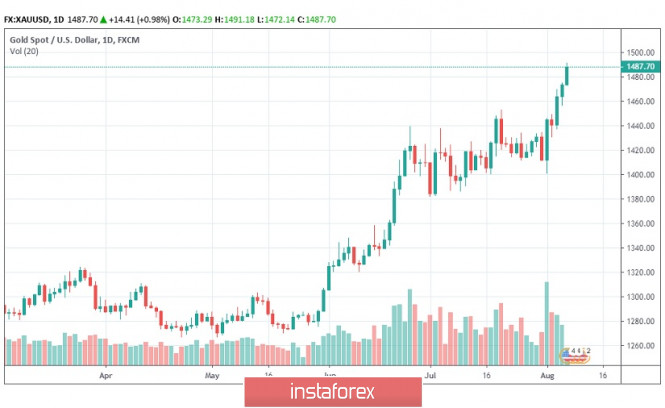 Fundamental factors remain notably positive for gold given fears over the global trade outlook. With increased expectations of further Fed rate cuts, gold is likely to test $1,500 per ounce. There will be a sharp correction from this level, but strong buying will quickly resume with short-term support near $1,480.

Spot gold has continued to move higher with fresh 6-year highs around $1,490 per ounce before correction to $1,487, while December futures have already been traded above $1,500.

The global move towards monetary easing has continued with further interest rate cuts over the past 24 hours.

The Reserve Bank of New Zealand cut interest rates more aggressively than expected to a record low of 1.00% from 1.50% and promised further action if necessary.

At its latest policy meeting, the Indian central bank also cut rates more than expected to 5.40% from 5.75%.

Market expectations of a further Fed rate cut at its September meeting have increased as well.

The move towards lower rates is being driven by a lack of confidence in the growth outlook which will underpin gold demand. The cost of carry for holding gold has declined, but it cannot move into negative yields. This is a very important factor given that a huge swathe of global bonds trades with a negative yield, the German benchmark 10-year yield, for example, has declined to a fresh record low around -0.55%.

There have been no major data releases over the past 24 hours, but risk appetite remains extremely fragile amid fears over the further deterioration in the US-China trade relations.

The Chinese yuan slightly weakened on Wednesday with the offshore yuan rate remaining weaker than the key 7.00 level at 7.07.

Rhetoric from China’s Global Times acting as an unofficial voice of the Chinese authorities warned that China would not yield to the US hegemony and that China was prepared for increased US tariffs.

There will be tough short-term resistance at the important psychological $1,500 level, but strong buy on dips will continue with a potential move to at least $1,565 this quarter.

GBP/USD: Opponents of the rigid position of Boris Johnson becomes greater. The euro may continue to rise to 1.13