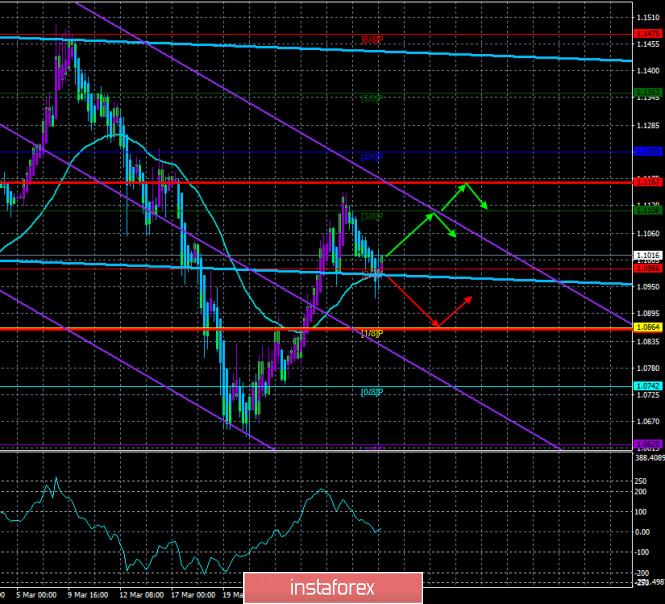 The third trading day of the week begins with the same corrective movement that was observed in the first two days. The price successfully adjusted to the moving average line and failed to overcome it within a few hours. Thus, at the moment, we can assume with a high probability that there will be a rebound from this line with the resumption of the upward trend. Moreover, as we have already mentioned in this article, the Senkou span B and Kijun-sen lines of the Ichimoku indicator were worked out, which also act as strong supports, from which the pair can rebound. As a result, we have three strong supports at once. So much the better. If the pair manages to overcome them, the chances of further downward movement will increase many times. If there is a stand-off, the campaign will resume to the north. What is undoubtedly pleasing in the current state of things is the declining volatility of the EUR/USD pair. Yesterday, only 126 points were passed, which is still a lot for the euro currency. However, the pair still does not pass daily by two hundred points, which indicates a slight calming of the market.

Today will be extremely interesting. During the third trading day of the week, a large number of various macroeconomic statistics will be published, from insignificant European to extremely important American. Let’s start with the European one. First, a report on retail sales for February in Germany will be published. This report does not even make sense to analyze since there is absolutely no market reaction to it. A little later, business activity indices in the manufacturing sectors of Spain, Italy, France, Germany and the European Union as a whole will be published. This data will also cause at least some market reaction, since the preliminary values have already been published, and they were not a failure or shocking. Yes, there will be a decline in business activity in the manufacturing sector of each country, but not as critical as in the service sectors of the same countries. In Germany, the expected value is 45.5 and in the European Union – 44.7. The values are low, but we would like to remind you that in the last year, business activity in the EU’s manufacturing sectors was already below the key level of 50.0, and the industrial sector itself at first just lost its growth rate and then declined in the last year and a half. It would be strange if business activity suddenly started to grow during the raging coronavirus epidemic. Thus, we believe that traders are ready for such figures and they will not be shocked by them. Also today, the European unemployment rate for February will be published, so it is not interesting.

The most interesting data will arrive on April 1 from overseas. First of all, we are talking about the ADP report on changes in the number of employees in the US private sector. Given the fact that the epidemic has led to the strongest increase in unemployment in the US, as well as an increase in the number of applications for unemployment benefits, nothing good can be expected from the ADP report. According to experts’ forecasts, we should expect a reduction of 150,000-170,000. Over the past 5 years, the States have only recorded a negative value of this report once, at the end of 2017. Thus, any negative value of the indicator can theoretically put pressure on the US currency. Next, two indices of business activity in the US manufacturing sector for March will be known, according to Markit and ISM. We remind you that the preliminary value of the ISM index is not published, and the preliminary value of the Markit index showed a minimal reduction compared to February – 49.2 points. Yes, business activity in manufacturing in the States will also go “below the waterline”, but this is not surprising. The surprising thing is that the decline will only be to 49.2 points or so. However, there is also the ISM index, which is considered more important and significant. And it is for the second index that a serious decline in business activity is expected, from the current 50.1 to 44-45 points. Thus, there is no doubt that business activity in the manufacturing sector will decline by the end of March, the only question is how much will the ISM index decline? But we still believe that first of all, traders will study the report from ADP. And I must say that it can be much worse than the forecasts. From our point of view, it is the ADP report that can provoke new sales of the US currency in the afternoon of Wednesday.

Meanwhile, Donald Trump, via Twitter, showed his satisfaction with the current levels of the Fed’s key rate and is also going to initiate a new bill to help the American economy by another $2 trillion. “Since interest rates are now near zero, it is time to pass the long-awaited infrastructure bill. It should be very large-scale and powerful, worth two trillion dollars. He should be fully focused on jobs and rebuilding our country’s infrastructure,” Trump wrote.

In addition to possible new monetary infusions into the US economy, the Fed will launch a new credit program for central banks starting April 6. Now foreign central banks will be able to receive dollar loans in exchange for US Treasury securities. Earlier, it was reported about the launch of several more programs for dollar lending to foreign central banks. Thus, the US government and the Fed continue to flood not only their economy with cash, but also the world economy. From our point of view, this may significantly reduce the demand for the US currency, which will see some oversupply in the near future. Of course, in the conditions of crisis and panic in the markets, participants can resume buying the US currency, guided only by considerations of the steadfastness of the dollar. However, all the same, fundamental factors will sooner or later return to the scene and make you pay attention to them.

As you can see, the COVID-2019 virus is not retreating. Thus, the markets remain in an agitated state. However, the panic is still slowly subsiding and this can not but please. The economies of many countries around the world remain put on pause, but you can judge their decline by official statistics. Moreover, everything will depend on the time frame during which it will be possible to localize the spread of the epidemic. First of all, this applies to the United States of America and the European Union. 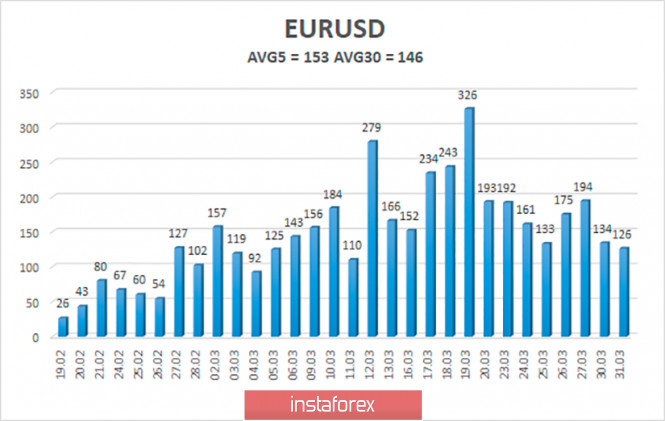 The average volatility of the euro/dollar currency pair remains at high values, but still continues to gradually fall. The average value for April 1 is 153 points and in the last eight days, the volatility does not exceed 200 points per day. Today, we expect a further decrease in the level of volatility and movement within the channel, limited by the levels of 1.0861 and 1.1167.

The euro/dollar pair continues to adjust. Thus, market participants are recommended to wait for the completion of the current correction (the reversal of the Heiken Ashi indicator up) and again buy the euro with the targets of 1.1108 and 1.1167. It is recommended to sell the EUR/USD pair only after fixing the bears below the moving average line with the first target of 1.0864. When you open any position, it is still recommended to be more cautious as the situation on the market remains turbulent.

Source:: Overview of the EUR/USD pair. April 1. A report from ADP on changes in the number of workers in the US could collapse the