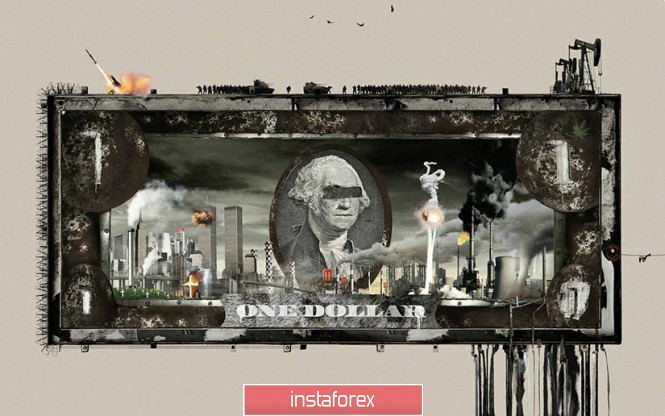 After several days of the new year 2020 passed, the oil and gold markets literally exploded after the US attack on Iranian general Qassem Soleimani, who was a crucial figure for the entire Middle East. An attack on a state official of this level in itself creates a dangerous “precedent” when one country can kill officials of another state at its own discretion. However, the assassination of the head of the Quds special forces unit, which enjoyed unquestioned authority in Iran and in Shiite circles outside its borders, could spark a widespread war. Moreover, the war, in one of the most explosive regions of the world, through which up to a third of world oil traffic passes.

As soon as it became known about the US attack on the Iranian representative, oil prices soared by 4%, and gold prices rose by 1.77%. In this regard, we, as traders and investors are very interested in the future prospects of these assets, which, however, are not as unambiguous as it might seem at first glance. I examined the dynamics of the price of gold just before the New Year and I must note that the situation is developing according to the plan, but somewhat faster than my expectations. Thus, I will comment on gold in the near future, so stay tuned, but today, I would like to stay on the oil market.

Among the many commentators on this crisis, there is an opinion that Iran, as a response, can block the Strait of Hormuz, thereby disrupting shipping on this important transport route, as well as attacking objects in Saudi Arabia. After that, oil prices will skyrocket to 100, 200 and even 500 dollars per barrel. However, such a development of events seems unlikely to me, and this is why: – Iran, of course, can try to stop shipping in the region, but I don’t understand what benefits and advantages it will have from it?

The first and most obvious result of the closure of the Strait of Hormuz is the rise in oil prices, although it will do little good to Iran. At the beginning of 2018, Iran produced 3.84 million barrels per day before Washington pulled out of the deal under the nuclear program. However, oil production in Iran decreased after the introduction of sanctions by the Trump administration, and in November 2019, production amounted to only 2 million barrels. Therefore, raising the price of oil to $ 100 could theoretically return Iran’s previous income, but it’s quite obvious that Iran will be even more internationally isolated by taking such measures. In addition, it is unclear how Iranian oil will be transported and sold on the world market, so who will buy it?

The second point is that Iran will not be able to harm the United States of America by shutting off oil transportation, and if it does, the damage to the United States from such actions can be minimal. Once the United States imported large volumes of oil from the Persian Gulf region, the overlap of traffic could lead to a large-scale energy crisis overseas. But now, America has provided itself with shale oil, and its surplus is exported to Europe and Southeast Asia.

In other words, the restriction of freedom of navigation, although it would harm the “American devil,” is not so significant and only in the short term. However, Iran’s reputation and financial losses from such actions can be much higher than the profit received. Among other things, such actions will help the States put together an anti-Iranian coalition among their European allies, who are now not eager to die for the extravagant tricks of Donald Trump.

In turn, the rise in oil prices will help the US shale industry continue to increase production at a new price level, without increasing the effectiveness of technology. As a result, the price of gasoline in the United States will certainly grow, but not so much as to plunge the American economy into crisis, and damage the campaign of Donald Trump, who, at every opportunity, will broadcast about the protection of democratic values and other American nonsense, which the United States, for at once, cover up their unscrupulous actions.

In turn, Europe will suffer first of all from the soaring oil prices, with its insane excise taxes on fuel and China, that is, direct competitors to the United States, and I do not think that the Iranian leaders do not understand this. An attack on the Saudi oil-producing infrastructure makes more sense from the point of view of Iran, especially since it can be carried out by someone else’s hands, but in this case, the consequences for Iran and the United States will be about the same as in the case of blocking shipping routes in the Persian Gulf. However, we will not think for Iranian generals and think, but what should we do? 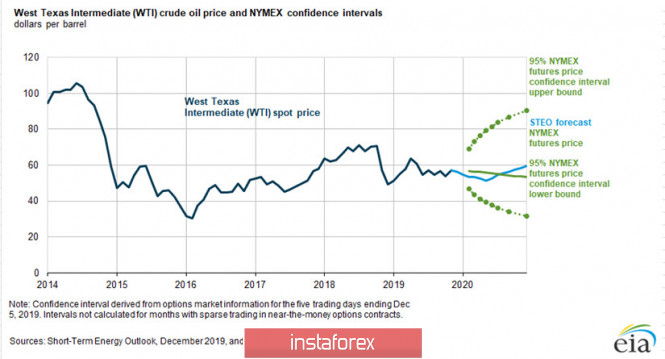 If you look at the oil market as traders and analysts specializing in this segment saw it at the beginning of December, the collective forecast looked like this: – in February 2020, WTI crude oil was forecast at $ 53.50 (US EIA analysts) and $ 56.75 (NYMEX traders ) (Fig. 1). Moreover, the parties radically diverged in price estimates as of December 2020: – analysts assumed the level of $ 59.50, in turn, traders predicted the weighted average level at $ 53.55. Thus, it should be noted that this forecast did not take into account the additional reduction in production that was adopted in early December following the OPEC + meeting and current geopolitical risks.

It does not matter for what reason, but with the forecast of oil prices for December and January, most specialists, both trading and forecasting, hit the sky with their finger. However, the fact is that countries decided to reduce production, speculators began to put their money on rising prices and increase their long positions immediately after the OPEC. This fact is all the more interesting if you look at it from the point of view of information leakage from the administration of the American president.

Over the previous four weeks, the number of speculative purchases increased from 209 thousand to 319 thousand contracts, i.e. more than 50%. At the same time, the total number of market positions was declining. Over the same period, Open Interest in WTI futures contracts decreased from 2610 to 2580 thousand contracts, which corresponds to the level of 2016, when the oil price was in the range of 40-50 dollars per barrel, and not the current values, when Crude Oil is traded ten dollars higher. Geopolitics provides a risk premium. 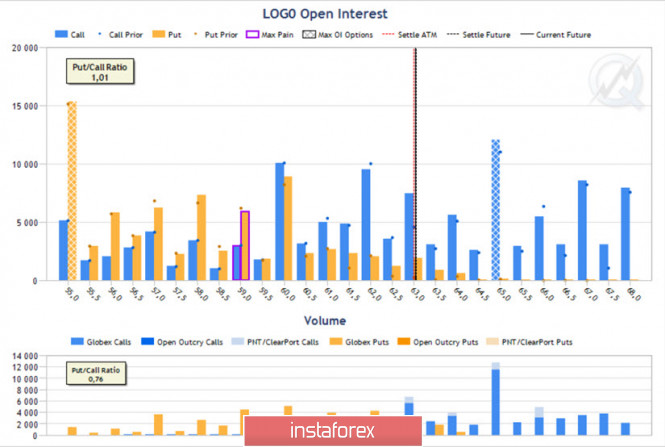 The position on the options market did not change significantly during the trading session, despite the increase in oil prices that occurred immediately after the incident. As before, the main resistance for the price is the level of $ 65, the number of put options corresponds to the number of call options, which indicates the equilibrium of buyers and sellers, and the point of maximum pain for buyers MP is at $ 59. This situation is more likely to indicate the preservation of the range formation rather than the beginning of a new trend.

In fact, new money must come to the market in order for oil to overcome the $ 65 mark and gain a foothold for it, but this is not yet, despite such a glaring event. The reason for the price increase may be a further escalation, but so far the parties are exchanging only threats against each other, and much depends on how soon Iran strikes back.

In terms of logic, I really want to buy oil now, but when did logic work well in the market, especially in conditions of increased volatility? There are no points for comfortable purchasing now, because it is not clear where to put a stop, so there is no need to rush, but I definitely will not sell oil now, since there is a very high risk that level 65 will not stand. As it will actually be, time will tell. Therefore, let us hope that a large-scale war does not happen.

On Monday, January 6, the US Commodity Futures Commission will publish new information on the positions of traders, and although the data will not include recent events, as the report was formed before them, perhaps something new will appear that will allow for greater certainty. For my part, I will, as quickly as possible, inform you about current events and changes.

Source:: Prospects for crude oil after US attack