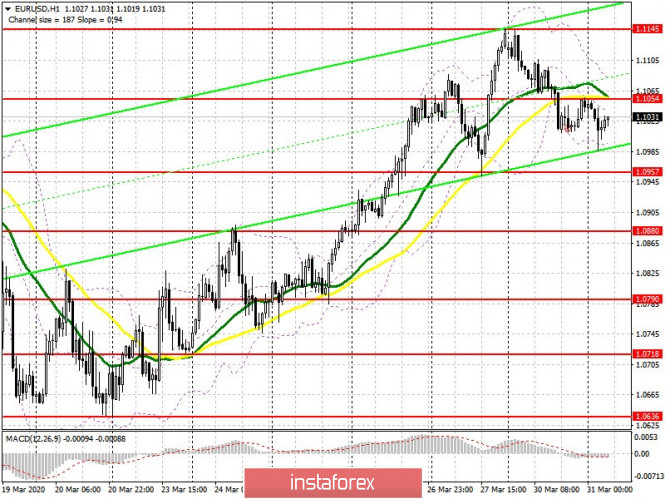 Yesterday’s data on the state of the European economy, together with reports from the Federal Reserve banks on the ground, discouraged buyers of the European currency from continuing to open long positions, which led to a fairly large downward correction in EUR/USD today in the Asian session. The bears are still aiming for 1.0957 support, which they will be aiming for today. The COT reports (Commitment of Traders) for March 24 continue to record an increase in long positions, and a decrease in short positions, as well as a sharp increase in the delta, which indicates a revision of their attitude to the market and a change of mood among players. The reduction in short non-commercial positions occurred from the 114,638 level immediately to 91,070, while long non-commercial positions, on the contrary, jumped from 147,133 to 152,360. As a result, the non-commercial net position continued to increase its positive value, and amounted to 61,290, showing an increase of almost twice, which indicates a clear advantage of the bulls. Given the prices at which the euro is currently trading, we can expect the pair to continue growing after a slight downward correction. As for the intraday strategy, at the moment, the bulls need to return to the resistance of 1.1054, which will allow the pair to maintain an upward trend and lead to a repeated update of the high of 1.1145, where I recommend taking profits. In the scenario of further decline, you can safely return to long positions on the support test of 1.0957, counting on a rebound of 40-50 points within the day, or buy EUR/USD from a larger low of 1.0880, the test of which will mean a break in the upward trend.

Sellers once again coped with the task of keeping the pair below the resistance of 1.1054 in the Asian session, which led to a larger sell-off of the euro in the area of yesterday’s lows. However, at the reached level, the bears are unlikely to stop and their next goal will be a larger support of 1.0957, where I recommend taking profits. More persistent players will expect the euro to return to the low of 1.0880, the test of which will completely cancel out the entire bullish trend observed since the 20th of March. In the scenario of an upward correction of the pair in the first half of the day after the data on inflation in the eurozone, which, of course, is unlikely, you can still return to sales after a false breakout in the resistance area of 1.1145, but I recommend opening new positions immediately for a rebound only in the 1.1231 area.

Trading is below 30 and 50 moving averages, which indicates the formation of a downward correction after a large increase last week.

Source:: EUR/USD: plan for the European session on March 31. COT reports. Euro sellers are returning to the market. Aim for support