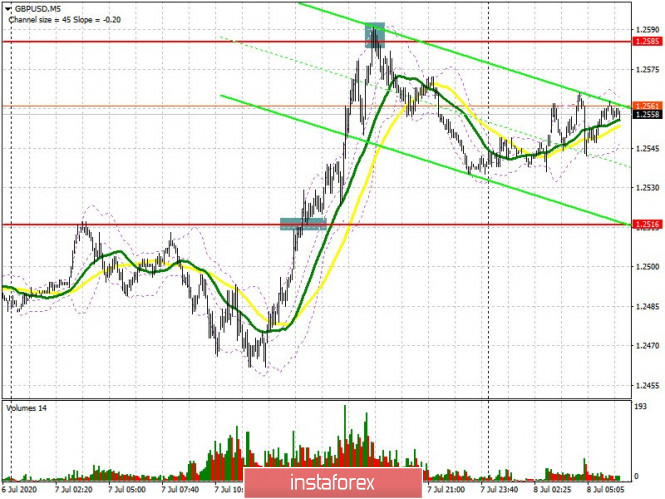 Yesterday’s news that an informal meeting of Brexit negotiators is taking place in the UK provided significant support to the pound, as it clearly indicates the parties’ interest in concluding a deal. If you look at the 5-minute chart and remember my forecast yesterday afternoon, you will see how it was possible to play on the side of both buyers and sellers. I spoke about consolidating the pair at 1.2516 and forming a signal to enter long positions at the beginning of the US session, which allowed us to take about 70 points from the market. But I think you also remember the 1.2585 resistance, where I advised you to open short positions immediately on the rebound, which allowed you to pull another 30-40 points from the market. At the moment, buyers of the pound should break through and consolidate above the resistance of 1.2585, but this will happen only after the speech of the British finance minister on the topic of supporting the country’s economy. A breakout of 1.2585 will open a direct path for GBP/USD to the highs of 1.2676 and 1.2803, where I advised taking profits, and will also maintain the bullish trend formed on July 1. Also, a good entry point into long positions will be to form a false breakout in the support area of 1.2526, where the moving averages also pass. If there is no activity there, it is best to wait for an update of a larger low of 1.2464 and buy the pound there for a rebound, counting on a correction of 30-40 points within the day. You also need to remember that the Commitment of Traders (COT) report for June 30 recorded another increase in short and long positions, which indicates a confrontation between buyers and sellers. The latter needs to be more active in order to return the wounds to their side. The COT report indicates that short non-commercial positions increased from the level of 48,170 to the level of 55,414 during the week. Long non-commercial positions rose from the level of 29,654 to the level of 34,424 during this time. As a result, the non-commercial net position increased its negative value to -20,990, against -18,516.

Sellers of the pound need to keep protecting the resistance area of 1.2585, its breakout will lead to a new bullish momentum. Forming a false breakout in the area of 1.2585 will signal the opening of short positions, but this will only happen if the UK finance minister announces negative forecasts in today’s speech. Other fundamental statistics will not be published today. A more important task for sellers of GBP/USD is to return and consolidate under the level of 1.2526, which also forms a signal to sell the pound and will lead to its decline to the area of the low of 1.2464, where I recommend taking profits, since it is not possible to go below this range the first time. The low of 1.2386 is still the bears’ long-term goal, which they will only be able to reach if the upward trend breaks. In case GBP/USD grows further, you should only look at short positions after updating the high of 1.2676, counting on a correction of 30-40 points within the day. 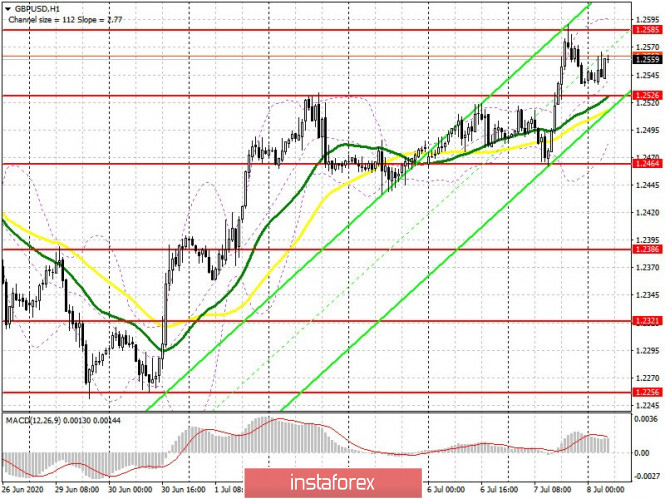 Trading is conducted above the 30 and 50 moving averages, which indicates that the pound will continue to grow in the short term.

Source:: GBP/USD: plan for the European session on July 8 (analysis of yesterday’s trade). Pound to continue growing with good news