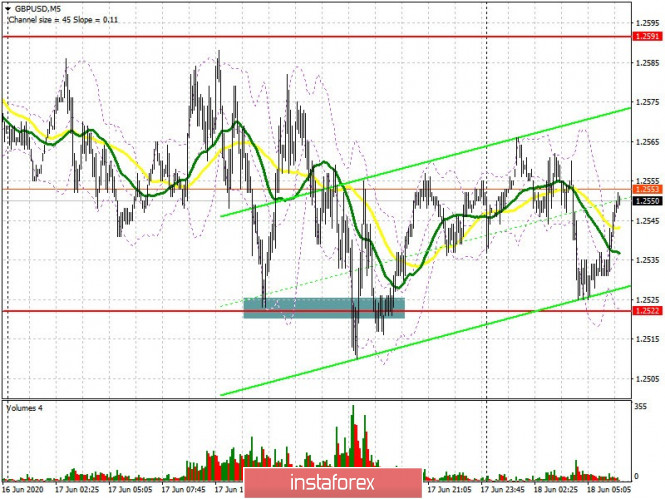 The British pound remains in the side channel before the important Bank of England meeting, at which, as expected, the regulator may decide to increase the bond purchase program. In yesterday’s forecast I drew attention to buying the pound with a repeated decrease and forming a false breakout in the support area of 1.2522, which happened. If you look at the 5-minute chart, you will see how, after the first rebound in the European session, the bears again tried to break below 1.2522, but nothing came of it, which forced them to retreat. Nothing has changed from a technical point of view, and it is unlikely to change before the publication of the decision of the Bank of England. The bulls need the same return to the resistance level of 1.2591, and this will happen only if the regulator announces new and additional measures to help the economy in the future. A breakout of 1.2591 will lead to a re-growth of the pound to the area of this week’s high of 1.2683, where I recommend taking profits. The farther target is still the area of 1.2801, the update of which will indicate the resumption of the bullish trend formed in early May of this year. If the pressure on the pound returns, it is best to return to long positions only after updating support 1.2522 and forming a false breakout there, by analogy with yesterday. You can buy GBP/USD immediately for a rebound only at this week’s low – 1.2453. It is important to remember that COT reports have undergone major changes that could affect the British pound. A sharp reduction in short positions and an increase in long ones were recorded in the report for June 9, which indicates a completely possible change in the market direction in favor strengthening the pound. There was a reduction in short non-profit positions from the level of 63,014 to the level of 52,941. By the way, this is the first reduction in short positions since April 14. At this time, long non-profit positions sharply rose from 26,970 to 28,893. As a result, the nonprofit net position reduced its negative value to -24,048, versus -36,044, which indicates a possible market reversal and building a new bullish momentum in the medium term.

A single decision on the highly anticipated expansion of the asset repurchase program will clearly not be enough for the British pound to strengthen its position. The pressure on the pound will increase in case the Bank of England governor presents a negative assessment of the economy. Therefore, the bears will continue to count on a breakthrough of support of 1.2522, however, consolidating below this level will not lead to breaking the bullish trend. To do this, it is necessary to cope with a more serious level of 1.2453, which is where the pound sharply grew this week. A good signal to open short positions in the first half of the day will be to form a false breakout in the resistance area of 1.2591, slightly higher than which the moving averages go. In the absence of activity on the part of sellers in this range, it is best to postpone sales until the test of resistance at 1.2683, based on a rebound of 30-40 points within the day. 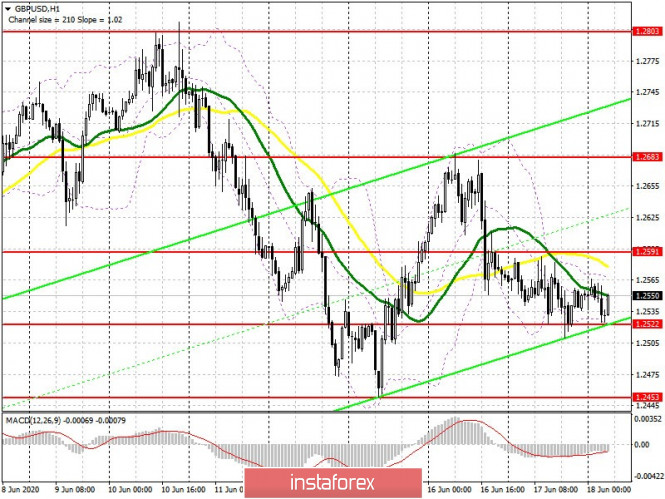 Trading is conducted below 30 and 50 moving average, which indicates the formation of a downward correction in the pair.

A breakthrough of the upper border of the indicator at 1.2560 will strengthen demand for the pound. A break of the lower border at 1.2522 will lead to a larger sale of the pair.